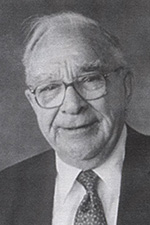 During the 1930’s, the tradition of Branford athletics epitomized  pride, success, determination, and dedication.  One such player who possessed these qualities and graced the short stop position in baseball and was a reliable guard on the basketball team, was 1999 Branford Sports Hall of Famer, William “Willie” Proto.

Born on March 3rd, 1921, the son of the late Pasquale and Rosa Pepe Proto, Willie attended Branford High School from 1936 to 1939, where he played baseball and basketball. The 1937-38 Branford High School Basketball team turned in what was then considered the most successful record of any team in Branford High School  history. Under the able guidance of coach John E. Knecht, Jr., (1988 Hall of Fame inductee), the Hornets brought home the only undefeated record that year in Connecticut.  That team showed unsurpassed skill and class in taking the Housatonic League Conference and Connecticut Class ‘B” State titles. Willie was a guard on this Hornets team, which won 21 straight games and in tournament competition, scored the most points of any team in either Class “A” or Class “B”, as they defeated East Haven (30-16), Plainville (53-28), and Windsor (37-18).  Tonight’s inductee also played on this team with other Hall of Famers including:  Steve Hylinski (1993), Joe “Butch” Naimo (1993), James Barba (1995), Paul Ward (1996), and Albert Torino (1997).  In his senior season, the Hornets came in second place in the Housatonic League, finishing with a record of 13-3. In the C.I.A.C. Class “B” Tournament, Branford defeated Wethersfield (24-17) before losing in the semi-final game against Manchester Trade, 44-40.

As a member of the baseball team at Branford, Willie was known as a “clutch guy who played a spectacular infield, and was a very reliable player who could hit and steal bases”, according to newspaper clippings written during that time. He was the captain of the baseball squad in his senior season

After graduation, he went to work at the Atlantic Wire and played basketball and baseball in the Shoreline Leagues. In 1942, he went into the United States Army as a member of the 379th Anti-Aircraft Battalion, where he saw service in England, France, Holland and Germany. His unit was nearly captured during the Battle of the Bulge.

Willie returned home from the service after four years and played softball  with the Sportsmen team. He continued to play basketball and baseball for a variety of teams including: the Branford Red Sox, Branford Sportsmen, Branford Townies, Branford Blue Devils, which he was a captain, and St. Casmirs in New Haven.

He married Imogene Barton on November 19, 1949, and is the father to Kathleen and William, Jr.  Willie retired from International Silver Company after 37 ½ years of service in 1984. Tonight, he joins brother, Tony (1998) into the Hall of Fame.