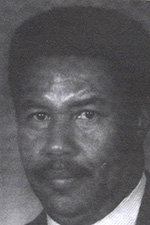 As opposing teams visited the Branford Hornets from 1950 to 1953, they saw an off –the field easy-going, witty, and friendly individual. However, when it came time to compete on the athletic fields, 2005 Branford Sports Hall of Fame inductee William General, Jr.  transformed into a talented, hard-working, unselfish, three-sport athlete who led Branford to several successful seasons.

A three year letterman in football, basketball, and baseball, Bill was a 4-Back on the Hornet football team.  In his junior season, tonight’s inductee was part of a 4-3 record, which included a Housatonic League tie with East Haven and Shelton.  In the annual Thanksgiving Day classic, East Haven entered the clash as the beasts of the Housatonic League, undefeated and un-scored upon.  That scenario changed dramatically on that day as Branford defeated East Haven by the final score of 7-6.    One of many key games that season for Branford was its 20-0 defeat of Lyman Hall.  In that contest, “Bill” made a dazzling 65 yard run in the fourth quarter to cap the final score for the Hornets.  That year, tonight’s inductee played along fellow Branford Sports Hall of Famers Joe Paul (1993), Russell “Butch” Gordon (1994), Vincent Casanova (1998), and Joseph Klimas (1998).

In 1953, tonight’s inductee led Branford to a 3-3-1 win/loss/record and was named to the All-State Honorable Mention Football Team.  General was the quarterback , threw for seven touchdowns passes and  kicked extra points for Branford, as they defeated Derby (27-6), Lyman Hall (31-6), and Shelton (18-12).  The team included Hall of Famers Dave Clark (2000), and Ron Tramontano (2002).

As a forward on the high school basketball team, Bill played for four years and lettered in three, in addition to being a captain in his senior year.  In 1952, the Hornets squad enjoyed a 16-5 year and reached the Class B State Tournament, losing to Shelton in the quarter-finals by a score of 51-47.  For the year, he scored 92 points, fourth in made field goals (32), and fourth in made foul shots (28).  In his senior year, the Hornets went 14-6 and advanced to the semi-finals of the C.I.A.C. state tournament.  Branford defeated Wilcox Tech (66-57) and Bullard Haven (66-53), before being defeated by East Haven (59-42), in the semi-finals.

Following graduation, Bill served in the United States Army from August of 1958 to November of 1961, including one year in Gelenhausen, Germany.  He later served as a supernumerary policeman for the Branford Police Department. Bill was a machinist for the Peucker Precision Product Company in Connecticut before his move to Arizona, where he was President of the Ace Cleaning Genie for 20 years in Scottsdale, Arizona.

Married to his wife, Nancy for 48 years, Bill is the father to a daughter, Michele and sons, William, III and Brett.