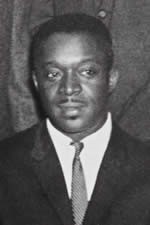 Wilbur Washington was a lifelong resident of Branford who graduated from Branford High School in 1950.  He was an outstanding athlete who excelled in football, basketball and softball.  On the gridiron Wilbur did not play until his senior year because of non-sports injuries.  He was a tailback for the Hornet’s single wing and was known for his amazing speed and accurate jump passes. His 94 yard kickoff return against Milford was a memorable example of his speed.  In the Thanksgiving Day clash with rival East Haven, Wilbur was recognized by Coach Sampson for his inspired defensive play.  Wilbur was surrounded with great athletes for the Hornets.  His teammates, Vin Casanova, Lou Locarno, Addison Long, Blake Lehr, Joe Paul, Bob Gill, Bob Massey and Butch Gordon, are all members of the Branford Sports Hall of Fame.  Massey observed, “Wilbur was so fast that once he broke through the line, no one was going to catch him.”  Those who knew him have speculated that had he been able to play four years of high school football, he would have been a heavily recruited college player.

On the hardwood, Wilbur was known for his great rebounding  and dominating defense as a member of Coach Sampson’s squad that, with Wilbur’s induction, boasts of all five starters being members of the Hall of Fame, including Blake Lear, Lou Locarno, Joe Paul and Addison Long.  On the BHS baseball team Wilbur could play every position except catcher.  It was accepted that when Wilbur bunted and it stayed in fair territory, no one was going to throw him out.

Wilbur was a standout performer for Branford’s George Washington Carver Club between 1946 and 1956, earning a reputation in fast pitch softball as a slugger for his prodigious home runs and as an effective, iron man pitcher, who often pitched three or more games a week.  Wilbur could have played with any team in the league, but chose to stick with the Carver Club so he could play with his friends. For the Carver’s basketball team he was a rugged rebounder who completed against Hall of Famers Bill Mischler, Bill Hinchey and Dave Marsh.  The team often traveled to New Haven, led by Wilbur and Addison Long, and held it own against some of the top teams in the area.

Upon graduating from Branford High School, Wilbur joined the United States Army and saw service during the Korean War.  After his discharge from the Army, Wilbur returned home and was employed by the MIF and the Town of Branford.  He was an active member of the AME Zion Church in Branford, providing leadership as a member of the Board of Trustees and as Pastor’s Steward.  He was treasurer of the Carver Club.  In his spare time, he liked to try his hand at restoring old cars retraining aggressive dogs and maintaining his remarkable physical fitness.

Wilbur Washington died in 1994, leaving Jenny, his wife of forty years, a son, Carlton, and a daughter, Belinda.