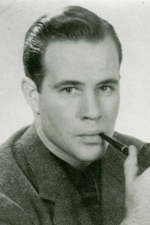 One of Branford’s premier contributors to youth sports, 1992 Branford Sports Hall of Fame inductee Warren B. Sampson Jr., served the town in many capacities: founder, instructor, official, and as he was most known for – head coach in three sports (baseball, basketball, and football.)

Born in Englewood, New Jersey on April 9, 1915, Sampson grew up in Plymouth, Massachusetts and graduated from Plymouth High School.  A graduate from Springfield College, Warren lettered in football, swimming and was believed to have won several collegiate level diving championships.  In August of 1935, Warren married the former Virginia H. Elliot of Newton, Massachusetts.

His first coaching job came at the Abraham Kellog High School in Treadwell, New York at a salary of $1500.00 a year.  His next coaching positions came at Oneonta, New York and at Central Islip High School in Long Island before his move to Branford.  While at Branford High school, Sampson taught Science, First Aid, and Gym classes.  He was also appointed to the position of Dean of Boys.  In his first year of coaching the boy’s basketball team, Sampson led the Hornets to a 16-6 record in the 1944-45 season and a Class B State Championship.  During that season, Branford started off with a 2-5 record after seven games, only to win its next 11 of 12 games during the regular season and then advance to the state championships game by defeating Wallingford 38-33, Rockville, 30-29, and Derby 31-25.  Sampson had four seniors leading the squad that year, including captain Henry Olejarczyk, Dave Clark, Robert Geier and Geno Nardella.  “I would classify Coach Sampson as a player-type coach,” said Robert Geier, a member of that 1944-45 championship team.  “He spent a lot of time with his players, a lot of private instruction.  His players had the greatest respect for him,” said Geier.

The following year, Branford improved its record to 17-5 and once again captured the Class B State Championship and the Housantonic League title as well.  That year, after 10 games, the Hornets has a record of five wins and five losses before Sampson and his squad, won its next 11 consecutive games to take two titles back to Branford.  In the Class B Tournament, the Hornets bested such teams as Middletown (38-26), Seymour (41-32), Robert Fitch (47-32), and Stonington (44-31).

In the 1946-47 season, Sampson and his Hornets had a perfect season, literally and figuratively.  With captain Bill Mischler leading the squad, the Hornets finished the season with a 21-0 record and another Class B State Championship and Housatonic League title.  That year, the Hornets average 49.1 points per game while their opponents were held in check, with a 27.2 average points per game.  In the state tournament, Sampson’s team defeated Milford (41-16), Stonington (37-0), and Wilcox Tech (33-31).

In his remaining five years as the Hornets head basketball coach, Sampson claimed one additional Housatonic League championship in 1950-51 as that team finished the season with a 14-5 record.  In eight years as a coach, Sampson finished with a record of 113-47, for a winning percentage of .706 and included a 37 game winning streak during his career.

Survived by a son, Elliott, and four daughters, Priscilla, Pamela, Barbara, and Virginia.  Warren B. Sampson, Jr. passed away on August 30th, 1952.