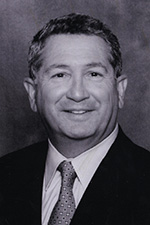 Athletic fields meant more to 2003 Branford Sport Hall of Fame inductee Vincent S. Giordano, Jr. than to most people.  Not only was tonight’s recipient an elite member of the football and track team, but a successful contractor of high school and college complexes.

Vincent attended Branford High School from 1961 to 1964 and while attending, he developed a passion for sport, especially on the gridiron. He became a member of the varsity squad as a freshman and grew in stature among his teammates as he demonstrated his desire to win as a running back.  As he honed his skills as a football player, Vincent helped his team win the Housatonic League title in his junior year.  That year Branford held a record of

6-2-1 and played alongside Hall of Famers Bob Tobin (’96), Edward “Leon” Brazzell (’99), Alfred “Allie” Aguzzi, Jr. (’02), and Bob “T.O.” Tokarczyk (’03).  In his senior year, Vincent received the coveted Savitt Award for Leadership and Sportsmanship.  His second varsity sport was track.  He ran the 100 and 220 yard dashes the  880 yard relay, the long jump and triple jump.  He captained the team in his senior year.  Vincent was the Class President for four years, Student Council President, and the President of the Connecticut Federation of Student Councils.

After graduation in 1964, Vincent went to Boston College where he played football his freshman year and then dedicated himself to academics and intramural sports. Vincent was an ROTC student and upon graduation was commissioned an Officer in the United States Army Corps of Engineers.  He spent his first two years of service in a Construction Engineer Battalion in West Germany.  As Platoon Leader of the Earthmoving Platoon, and then Company Commander of the Battalion Construction Company, he had many assignments to assist the local communities improving their infrastructure facilities including their recreational facilities.  This experience inflamed Vincent’s passion for sports as he took great pride and joy in the construction of soccer fields for the Germans.  This later inspired him to pursue the construction of Athletic Fields when returning to his family construction business.

After Germany, he served as the Facilities Engineer of Phu Bai Combat Base, Republic of South Vietnam.  At the conclusion of his tour, Vincent received the Bronze Star, Presidential Citation, and Certificate of Recognition from the Chief of Staff, General Westmoreland.

Tonight’s inductee has also been a valuable resource in the community as a President to the Branford Lions Club, President of the Pine Orchard Yacht and Country Club, Director of St. Therese’s Parish Council, President of the Association of General Contractors, Director of Connecticut Carpenter’s Benefits Fund, and the Master of Ceremonies for the Memorial Day Parade for 22 consecutive years.

He is married to his wife, Linda, and is the father to daughter, Elena, and son, Vincent.