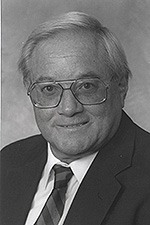 When visiting teams saw 1998 Branford Sports Hall of Famer Vincent Casanova on the football field or on the baseball diamond prior to game time, they saw a smiling, easy-going person.  All that changed, however, at game-time, when this two sport athlete, struck fear and intimidation to all who opposed him during the early 1950’s at Branford High School.

Born on August 20, 1933, the son of Joseph and Blanche Casanova, Vinny attended Branford High School from 1947 to 1951. While there, he was a  quarterback on the football team and a star pitcher on the Branford High School baseball team. Vin was a four year letterholder with the Hornets and was the captain on the 1951 squad.  In his senior season,  he led the Hornets to a 4-3-1 record and named to the All Housatonic League Team.  Known as a pin-point passer who utilized the jump pass and was a willing worker on defense as well, Vinny  helped lead the Hornets to an impressive opening season game, defeating St. Mary’s of New Haven, 13-7. He controlled the offense en route to two short distance runs for touchdowns by teammate Blake Lehr.  The next game, a 25-0 defeat of Rockville, Vin threw two touchdown passes both to teammate Lou Locarno. In Branford’s  contest against Lyman Hall that same season, the Hornets defeated the Trojans by a final of 27-0, in a game where Casanova rushed for a touchdown and threw for another.  He was selected Second Team All-State.  During his time on the football squad, Vincent played with fellow Hall of Famers  Joe Chandler ( Class of 1990), Peter Ablondi ( Class of 1992) Joe Paul ( Class of 1993),  Robert Massey Sr. ( Class of 1994),  Russell “Butch” Gordon (Class of 1994), Lou Locarno ( Class of 1996),  and  Blake Lehr ( Class of 1997).  In addition to these players, the team was coached by another Hall of Famer, Warren B. Sampson Jr. ( Class of 1992).

In baseball, tonight’s inductee,  wore the Hornets uniform for four straight years as a southpaw pitcher.  During the 1950 season, Branford opened against Housatonic rival Derby, only to shut them out, 3-0.  In that game, Vinny  pitched and threw a one hitter at the Red Raiders while striking out eight. The Hornets went on to defeat Shelton 6-5 and Derby again 12-11  with Vin on the mound.  This 1950 team was considered one of the most talented teams  to don the Hornets uniforms due to the many experienced players Coach Warren Sampson returned that year.

After graduating from Branford High School in 1951, Vincent attended the University of Connecticut from 1951 to 1955, where he was a four year letterholder in football. He started on the defensive line as a freshman eligible but was injured during pre-season. While at UConn, Vincent was a part of their Yankee Conference Championship in 1952-53 and later returned to familiar territory as the team’s quarterback and halfback. Vincent graduated from the University of Connecticut in 1955 with a B.S. in Business Administration. He was the owner of the Casanova Agency Insurance  from 1959 to 1986. In addition, he also coached football with 1992 Branford Sports Hall of Famer Dominic Cote for five years at Branford High School . Vin was a part of the historic team which won 17 games in a row and also was the head coach for the New Haven Rams Semi-Pro Football League and was a voluntary coach at Hamden High.

A former Branford Democratic Town Committee Treasurer and R.T.M. Moderator, Vincent now lives in Plantation, Florida and is the father to four children: Noreen (Feldman), Joseph, Vincent, and Coleen (Russo). “ I was taken by surprise by the news that I was being inducted into the Branford Sports Hall of Fame. It is true that I was involved in sports and in the town in many capacities. We have had great tradition here in Branford and it is an overwhelming experience to be inducted into the Hall of Fame,” said Casanova.