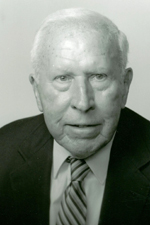 Eligibility to play on a John Knecht Jr. coached athletic team depended heavily on following specific values.  One has to reveal team spirit, establish a clean reputation and exhibit hard work at all times.  These traits were never better demonstrated than during the late 1930’s when young center and 1995 Branford Sports Hall of Fame inductee named Vic Lukawsky was showcased on one of Branford’s most lethal basketball teams.

Born in New Haven and residing in Branford for the past 70 years, Vic attended Branford High School and played basketball under the tutelage of 1988 Branford Sports Hall of Famer John Knecht Jr.  During Lukawsky’s junior season, Branford enjoyed one of its finer years in history.  After loosing its first three games of the 1936 season, the Branford basketball team promptly went on to win 11 of its next 13 regular season games and capture the Housatonic League championship outright against Wallingford.  Branford next encountered Lyman Hall of Wallingford for a repeat dual, this time for the state title, and advanced in the contest 29-17 and was crowned Class “B” Champions for the state of Connecticut.  That year, Lukawsky and the Hornets had a chance to make history by being the only Class “B” team ever invited to play in the Class “A” Tournament.  Playing the Burlington, Vermont entry, Branford held a comfortable lead but went down in defeat 29-20.

In 1937, Vic played on the Hornets basketball squad in one of its finest seasons with a 15-4 overall record, including an eight game winning streak and winning 14 of its last 17 games.  The 1937 team won the Housatonic League Class B Championship for the second consecutive year and entered the Class B Tournament, becoming the Connecticut Class B Championships for the third consecutive year.  Challenging the Class A Runner-Up Bristol team for the right to represent Connecticut in the New England Tournament at Portland, Branford fell to defeat 30-22.

In 1938, Vic received an alumni scholarship to the University of Connecticut, where he played basketball with 1993 Hall of Famer Yusievicz and another Branford Sports Hall of Famer Bob Donnelly (1989) and simply dominated the Yankee Conference.

Industrial League basketball was very popular in the 1940’s.  Lukawsky played for the M.I.F. team which was always a strong contender and actually won the Industrial League in 1940-41.  He also played on American Steel and Wire Company which won their division and included 1989 Branford Sports Hall of Famer Stan Petela on the roster.  In semi-pro basketball, tonight’s Peerless Six, inductee played for the Branford Grads, Branford Vets and the Branford Blue Devils.  In volleyball, Vic’s team, the Peerless Six won the town championship eight years.  In 1970, they also won the “triple crown” of volleyball by winning the Guilford and Madison tournament as well as the town league.

A serviceman in the Air Force for four years, Vic and his wife Georgia has three daughters and four grandsons.  He was employed by the Connecticut Hardware Supply for 42 years, concluding with 29 years as General Manager.

“I received other sports awards but this Hall of Fame award, elected by my peers, is the highest pinnacle.  This honor will always be special to me.  So now I turn another page of my sports life but I will fold the corner down.  It will be one of these exceptional pages that I can go back and look at from time to time,” said Lukawsky.