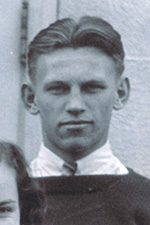 In  the athletic arenas, he inspired his team by his work ethic. In the classroom, he impressed many with his dedication to detail.  In his love for the community, he allotted his time to serve in many  ways.  2000 Branford Sports Hall of Fame inductee Tony Mott provided success, teamwork, and community pride to the town of Branford during the early 1930’s.

Very active during his high school career, Tony  was a member of the football, basketball, and baseball team.  As a running back in his freshman year, Tony enjoyed a successful season as the Hornets only lost one game to Derby, 13-7. That season, Branford posted six shutouts and outscored their opponents 97-19.  As a member of the Freshman baseball team ,he was elected captain.

The football season of 1931 was at that time, one of the best in the history of Branford High School.  Tony was part of a second consecutive Housatonic League football championship.  They  were also crowned the State “B” Class Champions.  The Hornets were the only undefeated (9-0) and unscored upon team in the state and earned a name for itself among the officials as one of the cleanest teams in the state. The most notable victories of the season were the ones over Commercial and Derby.

The basketball season of 1931-32 also proved to be  very successful.  Branford, due to the fact that it became a class “B” school made its schedule  much stronger by adding two games with each of the three area district  “A” schools : Hillhouse, West Haven, and Commercial.   The Hornets finished in second place  in the Housatonic League that season while Tony was captain  in his senior season.

Off the athletic field, he was on the Junior Prom Committee, the Senior Reception Committee and was Chairman of the Noon Entertainment Committee.  In his junior year, he was awarded  the Harvard Book Prize, President of the Student Council, President of the Varsity Club, Vice-President of the Faraday Club, Class President and Editor in Chief of the school newspaper.  Tony was also voted “Most Popular Boy”, “Done Most for Class”, “Most Likely to Succeed”, and “Most to be Admired”.

Following graduation, Tony attended Yale University where he played football  in 1936 on the 7-1 Bulldogs.  The captain of the ’36 team was Heisman Trophy winner Larry Kelley.