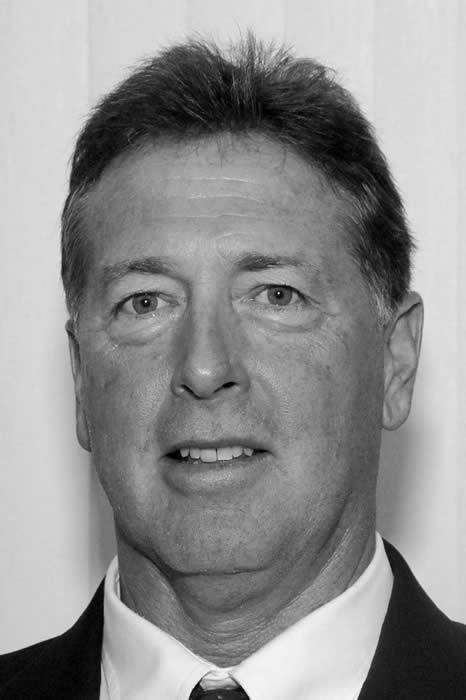 In the 1970’s Ted McSherry was one of the most successful athletes Branford produced. Ted had great size, strength, speed and agility. He had a gifted set of hands and was a fierce competitor. Ted excelled in basketball and golf, but mostly it was his stellar performances as a soccer goal keeper that has earned him induction into Branford’s Sports Hall of Fame.

Ted was born in 1954 to Ted and Nancy McSherry and was raised in Branford with siblings Eileen, Mike, Patty and Dan, who also were Branford athletes. After graduating from St. Mary Grammar School, Ted attended Branford High School. In 1970 he became the starting goal keeper for coaches Paul Rowan and Jim MacVeigh in the first varsity season for BHS soccer. Immediately, Ted’s natural athletic abilities propelled him into the forefront of the Housatonic League, where he earned All League honors. As a senior, Ted was team captain and posted shutouts regularly, as he led the team to a CIAC Tournament berth. He repeated as an All Housy selection. Coach Rowan called Ted, “…the best goalie I ever had. He was an awesome presence in the goal.”

Ted matriculated at UConn, majoring in Natural Resource Conservation, and lettered three times in varsity soccer. He was joined by BHS teammate Mike Swofford at UConn, both of whom were outstanding players and were elected captain by their teammates. Ted played 42 games in goal, starting in 31 straight for coaching legend, Joe Morrone, whose Huskies were just beginning their national prominence in soccer. Ted had 247 saves, 19 shutouts and allowed only 32 goals, and finished his career with the most wins (33), lowest goals against average (0.78) and fewest losses (4). His name appears more than dozen times the UConn Soccer record book. Ted was an All Yankee Conference selection in 1974 and 1975. He was team captain in 1975. Ted Played in the New England Intercollegiate Soccer League and was selected to the League’s All Star Team. For four years following graduation, Ted played in the Connecticut Premier Division. He received professional contract offers from Connecticut Yankees, Rhode Island Oceaneers and the Connecticut Bicentennials and was recruited by the NFL’s Dallas Cowboys.

In addition to his prowess in soccer, Ted was an outstanding basketball player, leading ST. Mary CYO to two consecutive Hartford Archdiocesan Championships, making the UCONN sub varsity team as a walk on and playing on 8 Men’s League championship teams. Former BHS basketball coach Tom Murray said of Ted, “If he had played for BHS, he would have been an All State basketball player.” In golf, Ted played for BHS and in the AT&T and Eel Pot leagues.

Active in volunteer work, Ted has contributed his time and expertise to the Mansfield Training School, Connecticut Special Olympics, Branford Elks Club activities, the New Haven Athletic Club and the Branford JAYCEES, where he served as Treasurer, Vice President and President. Ted conducted youth soccer camps in Branford and Ellington, as well.

Ted is a construction manager for AT&T where he has worked since 1984. He and his wife Joanne live in Guilford. He has two step sons, Evan and Ian.