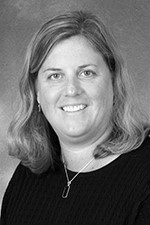 Labeled as an unsung hero of Branford swimming, 2008 Branford Sports Hall of Fame inductee Susan Lecza has demonstrated leadership, compassion, and devotion in many capacities.  As a high school and collegiate swimmer and later as a youth swim coach, tonight’s inductee has made an overwhelming impact on the Shoreline swim program for many to follow.

Following high school graduation, tonight’s inductee went on to swim at Skidmore College, where again for four years she was a top distance swimmer. She was elected captain in her sophomore, junior and senior year. Sue was a former school record holder in the 500 Freestyle, 1,000 Freestyle, and 1,650 Freestyle and was a qualifier in the ECAC for Division III.

After college, she began a very successful career as an accountant at Beers Hamerman & Company in New Haven.  Today she works as controller for Senior Care Development, LLC, a nationally recognized firm specializing in designing, building, maintaining, and operating a full spectrum of senior living facilities such as Branford’s Evergreen Woods.   Simultaneously, Sue has served as an assistant coach for the Branford Stingrays swim program.  Over the last two decades, she has been a cornerstone of the youth program working with the 11 and 12 year old swimmers, developing in them the fundamental skills, work ethic and team spirit that has resulted in success at the state, regional, and national levels.

For over 15 years, Sue has conducted a summer swim conditioning clinic that has helped prepare high school and college age swimmers for their upcoming seasons.  Five years ago, Sue took on the added responsibility of assistant coach of the girl’s high school swim team.  In the fall of 2004, the team raced their way to a 10-2 record en route to a Class M State Championship at Wesleyan University. The following year, 2005, Branford moved up to the Class L Division.  The Hornets ended the regular season that year with a record of 9-3, and went on to win another  State Championship at Southern Connecticut State University.

Sue joins her coaches and fellow inductees John O’Connor (Class of 1995) and George Miles (2003) into the Branford Sports Hall of Fame.