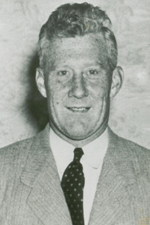 Never in the history of Branford has there been a more versatile athlete than Stuart J. Clancy, a two sports star at Holy Cross in the late 20’s and a professional football player with the early New York Giants in the days of Ken Strong.

Born in Branford in 1906, he was the fourth of seven children of William S. Clancy, founder of the funeral home that bears the family name. In high school Stu was a standout catcher, played end for the football team and both forward and guard in basketball. The most freckled boy in town to St. John’s  Prep School in Danvers, MA where he was converted into a skillful halfback. Once there, Stu was recruited by Georgetown University but O’Connell was named football coach at Holy Cross and convinced his Prep School prize to come along with him to Worcester.

At The Cross, Stu’s competitive fire made him a crack fullback and linebacker in the days of two-way players. On one memorable occasion, the kid who was know as “Wheels” in the Fourth Ward, returned from school to play for the Laurel’s in the famous 0-0 second battle with the New Haven Boys Club. Unfamiliar with coach Bob Kelly’s playbook, Stu handled the kicking chores and backed up the line defensively in a brilliant solo exhibition. The game was played in a blizzard and Clancy was never greater. His high punts with the gale at his back kept the home team at bay. Against the wind, he angled his kicks low and away from Albie Booth, later a Yale All American immortal.

Stu finished his college career as both basketball and football captain as well as All- Catholic, All-New England and honorable mention. A college rule against playing three sports, deprived Clancy of a catching position but on one Prep School occasion he was sought by the St. Louis Cardinals. George Weiss’ New Haven Pros were scheduled to play a doubleheader, the first against a league foe and the second against the Cardinals in an exhibition. Stu was at Weiss Field to see his brother pitch against Frankie Frisch. Walter Lerian was injured in the first game, and Weiss was reluctant to use his backup catcher in an exhibition fearing similar harm to number two, and Stu was recruited to receive. The Cardinal’s manager offered Stu a chance to make the big leagues after witnessing Clancy take out four of the speedy Redbirds trying to steal second base.

Following graduation, Stu joined the N.Y. Giants and as a teammate of West Haven’s All American and All-Pro Ken Strong, Clancy served as Strong’s blocking back for five years. Subsequently, he was to play for the N.Y. Yankees for a season and for the Danbury Trojans thereafter, quitting to coach the Bridgeport Pros. With the outback of World War II, Stu served the U.S. Navy as a Lt. Commander. At the war’s conclusion, he was to rejoin his father as a funeral director. Each Autumn, he served Yale as its freshman football coach and then directed the Jayvees through the regimes of Herman Hickman and Jordan Olivar with better than ordinary success.