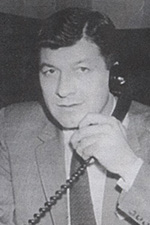 Every Branford team in every Branford sport had athletes deemed reliable, tough, consistent, and unselfish – a “go to” person. 1999 Branford Sports Hall of Fame inductee Steve Pauk was that type of athlete, playing three sports in his high school career and later claimed fame as a great contributor to the banking industry and to the Branford community.

Born in 1926 and residing in Branford his entire life, Steve was the youngest of seven boys and one girl.  He attended Branford High School from 1941 to 1944, where he played football, basketball, and baseball.  As a forward on the 1944 Hornets basketball squad, Steve was a valuable component to the Housatonic League champions. With a record of 14 wins and 3 losses during the regular season, Steve and the Hornets defeated Windsor (35-27) and Wallingford (37-33)  before losing to East Hartford in the Class B Finals, 39-37. In each of the tournament games, Steve was high scorer – scoring 18 versus Windsor, 11 against Wallingford, and 12 opposed to East Windsor.  He led the team in scoring that year with 220 points, most field goals made (94), and second in free throw attempts (56).  Considered one of Branford’s finest hoops team, the 1944 team included other Hall of Fame inductees including Joe Orsene (1989), Bill Hinchey (1991), Henry Olejarczyk (1998), and coached by 1989 inductee John Knecht, Jr. For two years, tonight’s inductee was awarded the Connecticut Interscholastic Athletic Conference Award of Participation  in competition to determine the championship basketball teams among the high schools in the state of Connecticut.

As a member of the baseball team, Steve played third base for the Hornets. In his freshman season, Steve was part of a team that won six games while losing one. It was a season during this time period which was considered one of the best teams ever in Branford baseball history.

Following graduation, Steve attended Milford Prep School, where he earned his letter in football in 1946 as a halfback.  He attended the University of Maine in 1947-48, and Arnold College from 1948 to 1950. At Arnold, he majored in Physical Education and participated in football, basketball, baseball, soccer, archery, and gymnastics.

During his enlistment in the United State Navy, he served two years in the Pacific from 1944 to 1946.  As a Boatswain, he drove the  landing craft carrying Marines to the shores of many islands.

Steve began his banking career with the First New Haven National Bank as Unit Manager of the Installment Loan Department, later becoming a Branch Manager.  Most people will remember him as Assistant Treasurer and Secretary of the Branford Trust Company in 1960-1964.  After a bank merger, he became Vice President of the North Haven National Bank.

Married to the former Barbara Gould, Steve was the father to two daughters and also a grandfather. Sadly, Steve Pauk passed away on April 1st, 1989.