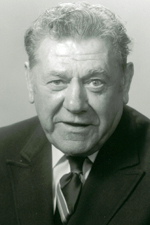 There have been many prominent teams throughout Branford High School but in the late 1930’s a dynasty embarked upon three consecutive Housatonic League basketball titles with an aggressive, devoted, gifted point guard leading the way in the name of 1993 Branford Sports Hall of Famer – Stever Hylinski.

Born in Branford, Hylinski attended Branford High School in the late 1930’s and graduated in 1938.  A two sport athlete, Steve enjoyed his finer moments on the hardwood floor as a member of the Hornets basketball team.  As a sophomore, Hylinski was a back-up player on Branford’s first championship team back in 1936.  Playing for the New England Championship, Hylinski joined fellow inductees John Yusievicz and Joe Naimo on the team, a squad which won the Housatonic League Class B Championship and the Connecticut Class B Championship as well.

In 1937, the Hornets finished with an 18-5 win/loss record and for the second consecutive year won the Housatonic League Class B Championship and for the third straight year, were crowned Connecticut Class B Champions.  Under the guidance of 1988 Hall of Fame inductee, John Knetcht, Jr., the Hornets won nice of its first 10 games.  In the Class B Tournament, the Hornets outscored its three opponents (Robert Fitch, Wallingford, and Naugatuck) 112 to 52 to capture the title.

The 1937-38 Branford High School Basketball Team tuned in the most successful record of any team in the Branford High School history.  With Hylinski as the captain, the Hornets brought home the only undefeated record in Connecticut.  Branford took home the Housatonic League Conference and Connecticut Class B State Championship, its fourth straight yeas as State Champions in Class “B”.  That team was the first squad to go through its season undefeated, winning twenty-one straight, and also the first year that a Housatonic League winner has been undefeated.

After high school, Steve was drafted by St. Stanislaus in New Haven to play in the State Polish Basketball League.  He played with other independent teams around New Haven including Hulls Collegians.

Hylinski also enjoyed success on the baseball diamond while at Branford, playing second base and averaging .300 as a hitter.  After graduation, Steve played second base on the Branford Town team in the Middlesex League with 1989 inductee Walter “Klinky” Klarman, Al “Doc” Aguzzi, and 1992 inductee Peter Naimo.  Hylinksi joined another team in the Shoreline League with Joe Naimo, 1991 inductee Bob Bradley, and John Yusievicz.  In the year before that league broke up, Branford beat Guilford for the Shoreline Championship.

A widower, Hylinski is the father of three children: Jane, Thomas and Richard.