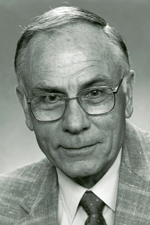 Considered “the Quiet One” of a Branford family of standout sports enthusiasts, Stan Petela focused his considerable skills primarily on basketball and now joins his big brother, Fritz, in Branford’s Hall of Fame. The quick-setting, fast-shooting basketball ace parlayed a brilliant scholar-athlete career at Branford High and three universities, and outstanding military service into early successes and fifteen years of coaching for Branford High School.

Stan played the outfield for the high school’s baseball teams in the late 30’s and early 40’s, but basketball was his forte and he captained Branford to the state Class B title in 1941. Considered a “pure shooter” by his late coach John E. Knecht, Petela won all-state honors as a forward.

Soon after enlisting in the United States Air Force in 1942, Stan became a crew leader on fighter planes with service in England, France and Germany in World War II, and was awarded the Bronze Star for meritorious service. During his service Stan led the 367th Squadron basketball team to the champion of the 19th Tactical Air Command and was chosen “Most Valuable Player”.

Shortly after his discharge, Stan matriculated at the University of Connecticut but transferred after his freshman year to Michigan State University and for two year was a bulwark of the Big Ten quintet, playing with the one time Boston Celtic Bob Brannum.

During this time he aggravated an old injury and transferred to Arizona University to forestall the advent of spinal arthritis in the dry heat of that climate. At Tucson, Stan coached Arizona’s crack freshman team during his senior year, an impressive introduction to a teaching career that spanned fifteen years for the ever-smiling Branfordite. In addition to his science and physical education classes, Stan coached at various times baseball, track, golf, cross country and football for Branford High School.

Before he retired in 1985 from teaching, tonight’s honoree acquired his Master of Arts degree from Fairfield University in 1959. After 15 years of coaching basketball, Stan retired in 1967 has head coach to spend more time with his family –  wife, Mary, and children Janet, Greg, and Jim. A tribute to his coaching abilities was received in golf in 1981 when his team captured the Housatonic League CIAC championship and individual State championships.

Other tributes awarded to Petela include the CIAC coaches and the Connecticut Coaches Recognitions in 1967, honorary membership in the New Haven County Officials Association, the Booster Club’s Hall of Fame in 1984.

Currently, Stan and his wife Mary are newly, proud and smiling grandparents to Eric Gregory Petela, thanks to their son Greg and daughter-in-law, Sandy. When he’s not grandparenting Stan is working on his daughters Janet’s new house. Both Greg and Janet are thankful their dad is retired. Stan’s other son, Jim, is teaching and coaching at Hopkins.

In his free time, a rarity ironically in his retirement, Stan sometimes plays a round of golf, walks with Mary, reads a few magazines and enthusiastically watches sports.