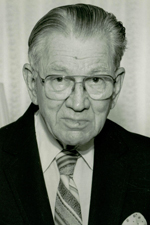 Multi-talented.  That description is the one which best portrays 1994 Branford Sports Hall of Fame inductee Rudy “Scag” Johnson.  A three sport athlete, the lifelong Branford resident helped the Hornets to several successful basketball seasons as well as being an exceptional citizen.  Educated through the Branford system, Johnson played football, basketball and baseball for the Hornets.  In the Milestone yearbook, Johnson was listed as a pitcher in baseball and as a tackle in football.  During his junior season, Johnson played on the Hornets football squad with 1992 Branford Sports Hall of Famer, Adolph Mischler.

The 1925-26 basketball squad proved to be one of the most successful in the history of Branford High School.  A long and difficult schedule of games were played in the course of which Branford met and defeated some of the largest and best school teams in the state.  Out of the 24 games played, the Hornets were 15-9.  The most notable accomplishments of the team were wins over Wilby High School (16-15), West Haven (21-15), Congress High (45-20) and New Haven High School (21-20) the state champions.  That year, the Hornets were chosen to take part in the Interscholastic Championship of the State for the Class C and D teams held at Storrs College.  Contrary to expectations, Terryville eliminated Branford in a very close game (23-17).  During the season, Branford scored a remarkable total of 673 points to the opponents’ 479.

The team of 1927 succeeded in accomplishing what no other team in the history of Branford High School could do.  That was winning a state championship and a Housatonic League championship.  The Hornets won 15 games and lost only five in addition to compiling a Housatonic league record of 11-1, losing only to Wallingford.  Branford won the Class C State Championship be defeating Leavenworth by a score of 18-16.  Johnson was the fourth leading scorer on the team that year with 87 points.

After graduating from Branford High School in 1927, Johnson went to Upsala College, where he was a multi-talented athlete as a strikeout pitcher in baseball and as a leading scoring guard in basketball.  Upon his graduation from college in 1932, Johnson was inducted into the Upsala College Sports Hall of Fame in 1992.  Off the playing field, Johnson served four years in the U.S. Army in World War II in the South Pacific.  He also participated in the invasion of the Philippines.  Johnson worked for the railroad in New Haven, as a substitute teacher in the Branford School System, served as the first President of the young Republicans, was a member of the Republican Town Committee, and was elected to the Board of Education.

Married to the former Doris Testori, Johnson is the father to a son, Dorrance.  “This award mean someone appreciated what we did on the playing field,” said Johnson.