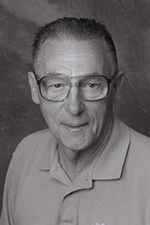 Demonstrating powerful trademarks as a winner, a traditionalist, and as an unselfish volunteer, 2002 Branford Sports Hall of Fame inductee Ron Tramontano has been an instrumental community figure throughout his life in Branford.

Another big claim to fame for “Rondo”, as he was nicknamed in high school , was his career in amateur softball that began in 1949.    As a pitcher/outfielder and later as a team manager/sponsor, Ron played from 1966 to 1975 on the Silver Dollar team that came in third place twice in the State Tournament. The team developed its identity in 1962, and by 1964, had begun to make its mark as one of the finest softball teams in New England. Tramontano played on the team for 24 years and in 1967 became its manager. From 1967 to 1974, the Silver Dollar team played without a loss to a Branford team. Playing at a whirlwind pace, the Silver Dollar had a banner year in 1968 racking up an 88-18 record and staking its reputation as a state and  New England powerhouse. The club won five in-state tournaments that year: two in Middletown, and one each in New Haven, Groton, and Branford. By winning the Branford tournament in 1968, the Silver Dollar became the first home team to take it, and then went on to win it two more times.  No other Branford team won the Branford tournament before it was switched to women’s play.  The team continued to play in-state and out-of-state tournaments with varying degrees of success.  In the statewide tournaments, the Silver Dollar finished fifth twice after its third place showing.  The squad journeyed to Long Island twice, Rhode Island four times, Pennsylvania once and New Hampshire, where another Hall of Famer Joe Klimas (1998), organized a tournament on a regular basis.   Throughout his career, Ron’s record as a softball player was 109-11.  He played in 11 regional tournaments, reaching the finals six times, and winning them all. Ron competed in state championship games seven times. The team played in the Branford Recreation Department’s annual Carl “Hop” Nuzzo Tournament, winning it once.

Off the playing field, Ron served in the United States Army from 1958 to 1961, including 19 months in Germany. He owned the Silver Dollar Restaurant from 1966 to 1975 and later Garfields until 1986.   Tonight’s inductee has been managing the Italian-American Club since 1990 in addition to organizing the club’s golf tournament since 1993. He has helped raise funds for Hospice  and the Father McGinley Cancer at St. Raphael’s Hospital in the name of Andrew “Pudgy” Amendola, raising over $10,000. For all his contributions, Ron was named Italian-American Club Man of the Year in 2000.

A supporter of Branford sports teams and cheerleaders, Ron is the father to Tesha, Ronda, and Donna.