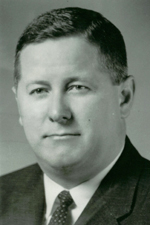 Consistently throughout his illustrious career at Branford High School during the 1940’s, 1996 Branford Sports Hall of Fame inductee Robert M. “Tot” Owens exhibited an honest work ethic in the classroom and on the athletic field, leading the basketball team to a state championship title and later in life, succeeding in the field of law.

Born in New Haven, Connecticut on August 25, 1925, Tot spent the major portion of his life in Branford, was educated in the Branford school system and graduated from Branford High School in June 1943.  While at Branford, tonight’s inductee was a two sport athlete, playing both basketball and baseball.  During his junior year, Tot and the Hornets basketball squad won the State Class B Championship, beating Woodrow Wilson in the finals.  Playing under 1988 Branford Sports Hall of Fame inductee Johnny Knecht Jr., and playing with 1989 inductees Stan Petela and Joe Orene, Tot was a 5-foot, 5-inch forward on the basketball team which won eight of its last ten games that year, and finished with a 14-7 record, including tournament game victories against East Hartford (53-31), Gilbert (51-36), Stonington (30-28), and Woodrow Wilson (41-35) in the title game.  In the championship game, “Tot” scored the last three baskets that sealed the victory.

In his senior season, Tot was named captain of the basketball team and once again led the Hornets into the state tournament, defeating Rockville 60-25 before bowing to Plainville (37-26).  Tot was also a fine pitcher on the Branford baseball team.  Tonight’s inductee left Branford High School with quite an impression for many to follow.  He was voted Most Popular Boy, Faculty Joy, Class Hero, Most Pleasing Personality and Best All-Around Boy, in addition to being on the Class Book Committee, Student Council and in the Boys Glee Club.

Following his graduation from Branford, Tot attended Boston College, graduating in 1947. He was a member of the football team as a quarterback.  One of these memorable moments came when he was called off the bench to beat Syracuse University 19-12, by throwing two touchdown passes.  Upon completion of his college studies, he matriculated at the Boston College School of Law.  While at law school, Tot was an assistant football coach as Boston College High school and coach of baseball and basketball at New Preparatory School in Cambridge.  After law school, he was admitted to the Connecticut Bar in January of 1951 and he maintained an office in Branford.  He was a member of the New Haven County Bar Association, Connecticut State Bar Association and the American Bar Association.  Tot was an outstanding Public Servant for the town of Branford, serving in the role of Clerk, Prosecutor and Judge for the Branford Municipal Court.

In addition to his duties, tonight’s inductee was very active in civic affairs being a charter member of the Branford Lions Club and served the club as President and as District Deputy.  He listed among his club memberships: the Knights of Columbus and the Knights of St. Patrick.  Tot was also very active in democratic politics, serving as organizer and first President of the Branford Young Democratic Club.

Passing away on October 16, 1984, Robert left behind his wife, Anne, and children, Kathleen, Betty, Mary, Suzanne, and Robert.  “This award would have meant a great deal to him if he were still alive today.  Robert was proud to be a Branfordlte and this is certainly the grandest honor imaginable to remember him by,” said Anne Owens.