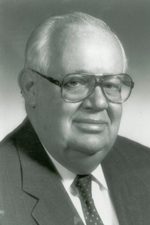 Civically, athletically, or professionally, 1996 Branford Sports Hall of Fame inductee Robert M. Geier was depended on heavily throughout his career to help people achieve success and to provide Branford with a role model many seemed to emulate.

Born in Branford on July 24, 1927, Bob attended Branford High School, where he was an active member of many social clubs such as the Boys Glee Club, the Service Squad, Student Council and the Class Book Committee.  His claim to athletic fame during his high school career came on the basketball court, where as a senior, he was part of the Hornets Class “B” State Championship team with teammates 1991 Branford Sports Hall of Fame inductee Bill Hinchey, 1993 inductee Bill Mischler, 1995 inductee Jim Murphy and coached by 1992 inductee Warren B. Sampson, Jr.  During the 1944-45 campaign, the Hornets finished the season with a 16-6 record, including two seven game winning streaks highlighted by victories over Wallingford (38-33), Rockville (30-29) and Derby (31-25) in post-season play.  “Gootch”, as he was known to many of his classmates, was a guard on the championship squad and guided Branford to many important victories including one against Wallingford during the regular season, when he netted a team high 10 points (a record for a guard) and played a brilliant defensive game, handing Lyman Hall a 38-31 defeat.  As a senior, he was voted “Best Sport,” “Best All-Round” and “Most Pleasing Personality” of his class.

After high school, tonight’s inductee attended Quinnipiac College, then known as the Junior College of Commerce where he was a two-year basketball star, graduating in 1948.  In May of 1988 Bob was honored by the Quinnipiac College Alumni Association Athletic Hall of Fame.

Bob attended the graduate school of Savings Bank at Brown University in the class of 1965.  He served in the United States Navy in 1945-46 and 1950-52, during the Korean War and he was stationed aboard the aircraft carrier USS Princeton as a yeoman second class.  Bob went on to join the New Haven Savings Bank in 1949 and served as branch manager, assisted treasurer, assistant vice president, mortgage origination, vice president in charge of loans and executive vice president and director.  He became president and director in 1976 before retiring in 1992 after 11 years as chairman and chief executive officer.

His unselfish ability to help social agencies and business organizations in the town was limitless as Bob was a director, president, chairman, treasurer or vice president for 18 groups including the Branford Board of Finance, St. Raphael Foundation, Quinnipiac College, Branford Community Foundation, Greater New Haven Chamber of Commerce, Branford Land Trust and First Congregational Church of Branford.  His many contributions to the town, and as an avid supporter of the Branford Police Department, earned him the distinction of theRobert M. Geier Police Services Building being dedicated to him on October 30, 1995.

Sadly, Bob passed away on January 9, 1994.  He left behind his wife, Janice Macomber Geier, a son, Robert M. Geier, Jr., three daughters, Deborah L.(Garber), Judith A. (Alessi), Nancy E. (Drevins) and 10 grandchildren.  “He would have been proud to be part of this induction and representing the teams he played on in the town,” said his wife, Janice.