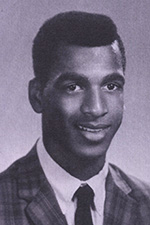 In 1961, a young family from New Haven made the move to Branford for a fresh start and in the process transformed Branford’s basketball future to a lethal powerhouse. The Hammie family easily transitioned to the Harbor Street School and 2004 Branford Sports Hall of Fame inductee Robert Eugene Hammie became a fixture on the basketball courts of Branford.

Bob shifted the balance of power in the epic neighborhood battles at the community house, from Indian Neck to Harbor Street.  Teamed with future teammate and fellow Branford Sports Hall of Famer Gary Lipkvich (’01), Harbor Street was the place to play in the early sixties.  In 1965, the tall, lanky affable individual known as “Ham” began to develop his unique rebounding style which would carry the Branford Hornets basketball team in 1968 and 1969.  With his amazing leaping ability and speed, he would clean the glass and in one motion pitch to the outlet then lead the break down the court for an easy lay-up.

In high school, Bob lettered as a sophomore and with the graduation of Branford’s super seniors and fellow Hall of Famers, Jerry Schmitz (’96), Ted Kaczynski (’99), and Joe Roberti (’99) in the previous year, assumed the responsibility of starting center his junior year.  Bob’s hard work ethic and true team play led the Hornets and first year coach Tom Murray (BSHOF Class of ’92), to the Housatonic League title.  Bob came of age in the state tournament leading Branford to two early victories over Penney and Simsbury only to come face to face with #1 ranked team Wilby.  Bob’s numerous blocked shots and 17 rebounds kept the Hornets in the games until the final seconds. Branford lost 66-62.   In 1969, he was voted quad captain and led the second ranked Hornets to an 18-1 record and was named all-Housatonic.  He led Branford in scoring with a 16.1 average on a team where six players averaged double figures.  His 13.7 rebounds per game also led the Hornets.  In typical “Ham” fashion, he saved his key games for the big stage in leading the Hornets over the front line of Cheshire with 21 points and 15 rebounds and his signature game against East Haven with 21 points and 20 rebounds.  Bob ended his sterling career at Branford on the losing end to state champions East Catholic, 52-40.  Off the athletic spectrum, Bob’s major contribution to the high school scene was not only his scholastic record but his showcase talent on the dance floor at the Friday night dances at the Branford Community House.

After graduation, Bob attended Central Connecticut State University and received his Bachelor of Science Degree in Marketing in May 1973. While there, he played basketball and was a co-captain in his senior year.  He earned a scholarship to CCSU and played for legendary coach Bill Dietrick.  Bob was a three year starter at Central and served as captain his senior year. During Hammie’s four years, the Blue Devils were a national ranked team and played in the Division II Final Four in 1970. Bob was a leader and pulled down 542 rebounds at Central.

From 1973 to 1978, he was a counselor for the Lincoln Hall School for Boys in Lincolndale, New York and from 1978 to 1984, he was an Underwriter Supervisor for Aetna Life and Casualty.  Sadly, tonight’s inductee passed away at the age of 34 from cancer on November 3, 1984.