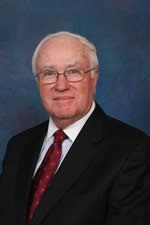 Robert A. DuPuy was raised in Branford on Bryan Road, the stamping grounds of 11 members of the Branford Sports Hall of Fame, and on the playgrounds of Short Beach School, Hammer Field and the Little League Field. This began an active interest in sports that has continued to present.  Following in his father’s footsteps as a referee, Bob began basketball officiating for Joe Trapasso in the Community House and umpiring with Joe Chandler and Hop Nuzzo.  It began an avocation that continued through college, law school and 25 post graduate years in Milwaukee, umpiring and officiating on the high school, college and semi-pro levels and playing recreational hockey from high school until 1990.  This was an initiation into the world of sports that eventually led to his present position of President and Chief Operating Officer of Major League Baseball.

Bob attended Notre Dame  High School where he was in the National Honor Society.  He was active in the school newspaper, band, current affairs and debate; and he played on the N.D. club hockey team. Graduating in 1964, Bob attended Darmouth College, receiving an A.B. in 1968. Bob was in the U.S. Army from 1968 to 1970, including a year in Vietnam in the 504th Military Police Battalion, where he earned the Army Commendation Medal for his service.

Upon receiving his law degree from Cornell in 1973, where he was Editor-in-Chief of the Cornell Law Review, DuPuy joined Foley & Lardner, becoming a partner in 1980. He has functioned as a member of that firm’s Management Committee, and as Chairman of the firm’s Professional Standards Committee. He is a long-time member and Past-Chairman of the State Bar of Wisconsin’s Professional Ethics Committee. He has taught legal ethics and professional responsibility at several universities in the Milwaukee area and has served as a longtime faculty member of the National Institute of Trial Advocacy.

Bob has been involved in most of Major League Baseball’s legal issues since 1989, when he was hired as outside legal counsel. He negotiated the collusion grievance in 1990, and was the principal outside counsel to the Commissioner and the Executive Council from 1992 until 1998, when he was hired as MLB Executive V. P. of Administration and Chief Legal Officer.

Bob’s hobbies include collecting fine wine (He has a 2,500 bottle collection), golf, reading and, of course, watching baseball.

Bob and Edith DuPuy have been married for 39 years and have four children, Leslie, Allison Bly, Jeffrey and Kevin, as well as two grandchildren, Abigail and Natalie Bly.