Inductees by YearRobert A. Gaffney 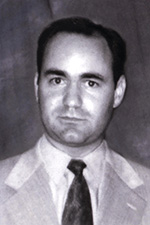 Throughout the early 1980’s, the Branford High School boy’s swim team captivated  attention throughout the state, as one of the most successful  programs in Housatonic League and Connecticut Interscholastic athletic history. One of the key contributors to the squad during that time was tonight’s hall of fame inductee, Robert A. Gaffney.

Born in New Haven on April 7, 1965, the son of Robert and the late Marie Gaffney, Bob  graduated from Branford High School in 1983. While attending Branford High, tonight’s inductee was an All-State swimmer for the Hornets. Fellow Hall of Fame inductee John O’Connor (1995) coached him.  In 1982, the Hornets swim team had an excellent year, winning 11 meets and losing only one.  As a junior, Bob was Branford’s top state qualifier in the 100-yard breaststroke.  In his senior year, Bob was part of the 11-3 Class M State Championship team and a state finalist in the 100-yard breaststroke and the 200-yard medley relay.  For his achievements in athletics and in the classroom, Bob earned the 1983 Swim Team Scholar Athlete Award.

Following high school, Bob attended the University of Connecticut from, where he earned a Bachelor of Science Degree in pathobiology, cum laude, in 1987. He was a recipient of the 1987 First Company Governor’s Footguard Scholarship for academic excellence in science  and was a participant in the 1985 Council for International Educational Exchange summer work abroad program in London, England.  From 1987 to 1989, Bob furthered his studies at the University of Chicago, where he was accepted into the Ph.D program in molecular genetics and cell biology with a full scholarship. While at the University of Chicago, he was granted the National Research Service Award and conducted research that led to co-authorship of three publications.  After two years in the program, Bob decided to shift his focus in order to pursue a career in business utilizing his technical science background.  He graduated from the University of Chicago in 1989 with a Master of Science in molecular genetics and cell biology. Bob worked in research at Northwestern University Medical School and attended the J.L. Kellogg Graduate School of Management at Northwestern. Bob graduated from Kellogg in 1995 with a Master of Management in marketing and management strategy.

In 1995, Bob went to work for Bio-Rad Laboratories, a biotech company based in California, with offices in over 40 countries.  Bob started out as an Account Manager in Bio-Rad’s Mid-West region. While in that position, he lived in Minneapolis. In 1997, Bob was promoted to Associate Product Manager for Bio-Rad’s Quality Systems Division, based in Irvine, California.  He relocated to California and eventually settled in Long Beach. Bob held positions of increasing responsibility for the Quality Systems Division and, in 2003, was promoted to Division Marketing Manager.  As Division Marketing Manager, Bob managed a department of 24 and was responsible for worldwide marketing and new product development. He traveled extensively for Bio-Rad and visited customers and Bio-Rad subsidiaries around the world.

Bob loved to travel, whether for business or pleasure. He visited 25 countries, including Russia, China and Vietnam. Prague and Paris were among his favorite cities.