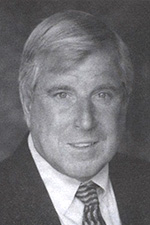 anything else, through hard work. And that’s the price we’ll have to pay to achieve that goal, or any goal.”

Throughout his career, as an educator, a swimmer or as a coach, 2005 Branford Sports Hall of Fame inductee Richard Thompson exemplified the sentiments of  this successful N.F.L. head coach.

A four year letterman in swimming at West Haven High School from 1965 to 1968, Rich captained the team in his senior year.   He was a member of the school record relay teams in the 160 medley relay and the 200 medley relay. In his senior year and as co-captain of the swim team, Rich led West Haven to a 9-6 record and was selected to the All-District Team and chosen “Team Most Valuable Swimmer”.

Following graduation, Rich attended Southern Connecticut State University from 1969 to 1972, where he received his Bachelor of Science degree in Health and Physical Education. While there, tonight’s inductee was a four year letterman and captain for the Owls swim team, where he was considered one of the “best breaststroke prospects on the team”. The Owls compiled a 31-12 record over a span of four years while Rich was there.   His 1969-70 team finished third in the New England Championships and ranked as one of the top college division teams in New England.  As a senior, Rich was part of the Owls swim team which recorded a 7-2 dual meet record and a second place finish in the New England championships.  He was a New England finalist in both the 100 and 200 yard breaststroke.

Rich began teaching Physical Education at West Haven from 1972 to 1973 before he began a long and illustrious career in the Milford School System from 1973.  He began his coaching career at Jonathan Law High School from 1973 to 1977, first as an assistant and then as the head coach.  Tonight’s inductee moved to Foran High School, where he coached Cross Country for three years and Boys Swimming for eight years from 1977 to 1985.  Rich was named the Connecticut Interscholastic Swimming Coaches Association Coach of the Year in 1983 and 1985. He led Foran to two Class M State Championships in back to back years (’83 and ‘84) and won the Cross County Interscholastic Athletic Conference titles five consecutive titles from 1978 to 1982.

In 1981, Rich received his M.S. degree from Southern Connecticut State University in Physical Education/Human Performance and in 1988, he received his 6th Year degree in Administration and Supervision.

Rich decided to leave coaching in 1987 to pursue other opportunities but fortunately for Branford, after a few years away from coaching, decided to return.  He was the Branford Stingray coach for the nine and ten year olds for seven years and during the summer has been the coach and the pool director at the Pine Orchard Club.  After twenty-four years in the Milford School System, he transferred to Branford and now teaches at the Walsh Intermediate School.   Rich was the Assistant Girls Swim coach for nine years and is now starting his ninth year as the Boys Head Swim Coach. With Branford, he coached the Class M State Championship Boys Swim Team in 2001 , as they easily defeated Wilton High School and subsequently  was named the 2001 Connecticut High School Coaches Association  Coach of the Year.  Last year he  guided the Hornets to a Class M State Runner-Up.    In 2005, tonight’s inductee was the Connecticut nominee for the National Coach of the Year spons0red by the National High School Athletic Coaches Association.

With his 39 years of coaching experience, he has assisted the Pine Orchard Country Club swim program and led its league to seven champions in addition to nine years as the Branford Recreation Department Stingray Club Coach.

Rich is married to his wife of 30 years, Diane, and is the father to two sons, both swimmers, Ryan, a sophomore at the University of Connecticut and Michael, a sophomore at Branford High School.