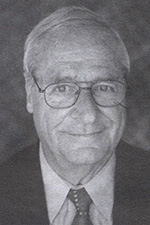 Rare is it to find an individual who at a very young age possesses a quiet confidence, a competitive spirit, and stellar athletic prominence. However, 2005 Branford Sports Hall of Fame inductee Richard Bentley demonstrated all those characteristics early in his life, in athletic, military, and business venues.

Raised in the Short Beach area of Branford, tonight’s inductee participated in basketball and baseball at the grade school level and also was active in Branford Little League.   As a student at Branford High School in the late 1950’s Dick played three years of basketball and baseball. During his junior year, the baseball team tied for the Housatonic League title with Lyman Hall, finishing with an 8-4 league record and 12-4 overall.  The team was comprised of other Hall of Fame inductees including Jack Cirie (1991), Tom Murray (1992), Dick DeSarbo (2003) and was coached by Gerry Crotty (2000).  During that title run, he hit an impressive .373. In his senior year, Dick was co-captain of the baseball team along with Dick DeSarbo.

After graduation, Dick Bentley enlisted in the United States Navy where he served a three year term on a Destroyer Class Ship with tours of duty in the Mediterranean Sea; at Guantonamo Bay, Cuba; and in South America.  Ultimately achieving the rank of Radarman 3rd Class Petty Officer, he received a Honorable Discharge in 1961.

In 1963, he joined Cramer Electronics starting his career as a shipping clerk.  In his fifteen years at Cramer, he held multiple positions with a variety of job responsibilities, eventually becoming the Branch Manager in Wallingford, Connecticut.  He left Cramer in 1978 to join Marshall Industries, another electronic distributor, as the Northeast Regional Manager in charge of sales and marketing operations for Marshal’s six divisions located on the East Coast.  In 1986 he was assigned to the company’s headquarters in El Monte, California as Vice President of Sales. As Senior Vice President  of Sales & Marketing, a position tonight’s inductee earned two years later, he directed Marshall’s  entire sales and marketing functions, as well as the company’s advertising, promotional, and publicity programs.  He held that seat until 1990, when he was appointed Executive Vice President and Chief Operating Officer where he reported to the office of the Chief Executive and oversaw the company’s complex operations on a day-to-day basis.  In that capacity, Dick was directly responsible for Marshall’s sales and marketing efforts; management information systems operations; facility and equipment acquisitions, including value-added and warehousing functions as well as the company’s employee relations and human resources department.

He and his wife Beverly moved from Wallingford to Claremont, California in 1987, then to Guilford in 2000. They have been married for 42 years and have a daughter, Susan and a deceased son David. The Bentleys have two granddaughters.