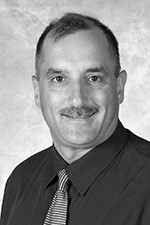 Respectful.  Humble.  Unselfish.  These are just some of the traits which best describe 2008 Branford Sports Hall of Fame inductee Richard D. Biondi as a shining track and cross country athlete, an exceptional educator and an inspirational coach.

As a three-year varsity athlete on the Hornets’ indoor track squad, Rich was named to the All-State Team in the 3000 meters during the 1983-84 season and was a tri-captain in 1984.  Tonight’s inductee also earned accolades while he competed for the Hornet’s cross country team.  As a three year varsity member, he was named to the All-Housatonic League teams in his sophomore, junior and senior season. He held the school record at the Old Branford Supply Pond Race Course in the 3.5 mile, with a time of 17:49, set in his senior year.  The cross country teams enjoyed winning seasons during the “Biondi years”, putting together an 8-4 record in his sophomore season, in which he was later named to the All-State team.  Branford was 6-4 in Rich’s junior year and 9-3 in his senior season.  For his accomplishments, he was named to the New Haven County Team in 1984.

After high school graduation, Rich attended Southern Connecticut State University from 1985 to 1988 and was a member of the cross county, indoor and outdoor track teams.  He was part of the 1985 cross country team that was fourth at the NCAA’s, the 1985 indoor track team that was sixth, and the 1987 cross country team which finished ninth.  He graduated from Southern with a bachelor’s degree in history in 1988, received his master’s degree in 1991 and later earned his six-year degree in 1997.

Rich became a full-time track assistant in the spring of ’89, was named head coach of the boys indoor team in 1993 and co-head coach of the outdoor squad in 1994.  Under his direction, the Hornet’s indoor team won four divisional titles, the 2004 Hammonasset Division and the Oronoque Division titles in 2005, 2007 ,and 2008, and was the Southern Connecticut Conference (SCC) Runner-Up Divisional Champions in 2008.

As co-head coach of the outdoor track team with Scott Jenkin, this inductee led Branford to a Class MM State Championship in 2005, (the first in school history), and SCC Conference Runner-up  with a 14-0-1 undefeated seasonal record, two Hammonasset  divisional titles (2003 and 2004), three Oronoque Division championships (2005,2007, and 2008) and the 2008 SCC Conference Championship.    For his efforts, he was named the New Haven Register Co-Coach of the Year after the 2005 and 2008 seasons.  Spanning a period of 13 years, Rich holds a career coaching record of 116-49-1 in track and field.  He has coached 58 athletes to All-Division status, 24 All-Stater’s, nine to the All-SCC team and 4 to the All-New England team.

Rich is the author of a book on Italian American Boxers entitled Pugilistic Paisani , an extensive research done on Italian-American boxers in the United States and Italy ,where he interviewed over 250 fighters and boxing trainers.  He has also authored articles published in the National Italian American Hall of Fame.

Rich lives in North Haven with his wife of 14 years, Ramona, who was also an All-Housatonic League runner at Branford.