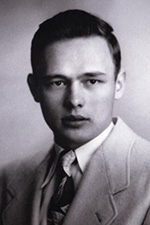 Off the playing field, 2006 Branford Sports Hall of Fame inductee Raymond Sobolewski was recognized for his pleasant disposition and ability to make new acquaintances.  On the playing field, he was known for his competitive spirit and dedicated teamwork.

In basketball, Ray was a starting guard for the Hornets. As a junior, he was a member of Branford’s 17-5 season, which included a Housatonic League Championship and Class “B” State championship. The state title was taken after four tough games in the Yale Gym, defeating Middletown (38-26), Seymour (41-32), Robert Fitch (47-32), and in the finals, Stonington (44-31).   In his senior year, the 1946-47 team recorded a perfect season (21-0), winning 18 regular season games and three CIAC tournament games, defeating Milford (41-16), Stonington (37-30), and Wilcox Tech (33-31),  to repeat as both the Housatonic League and Class “B” state championships. Ray scored 125 points (third best on the team), and was praised for his “one-handed shot” and “skill in getting the ball into the front court”.   Tonight’s inductee played right field as a member of the Hornet’s baseball team.

Following graduation, Ray decided to leave Branford and opted for a four-year enlistment in the United States Air Force in 1948.  As an Airborne Radio Operator, he traveled the world aboard an Air Force bomber attached to the Strategic Air Command.   He was discharged from the service in 1952 with the rank of Staff Sergeant.

Ray began his studies at Springfield College in 1953 and received his Bachelor’s degree in Physical Education, Mathematics, and Science in 1956.  He continued his academic work at Springfield for an additional year and received a Master’s degree in Guidance and Personnel Services.  Upon leaving college in 1957, Ray taught high school math and science for Milford and New Haven (Hillhouse High School) public school systems. He also served as an adjunct member of the evening faculty at Norwalk Technical and Greater New Haven State Technical College, where he taught calculus.

Sadly, Ray passed away in 1986 at the age of 57. His wife, Elaine, and daughters, Joanne, Terry, Nancilee, and Carolyn survive him.  Ray and Elaine were the parents to another daughter, the late Rosemary Sobolewski.