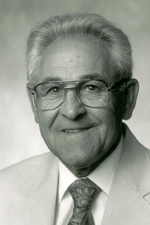 For every successful team, there is an individual who is a caring coach, a great friend and a special person who cares.  In tonight’s Branford Sports Hall of Fame, inductee Raymond Orsene is that three-in-one person.

Born and raised in Branford, Raymond attended local schools and graduated form Branford High School in 1941 where he also played basketball for one year.  After one year of working, Raymond was drafted into the Armed Forces on November 10, 1942, with the 83rd Infantry Division at Camp Atterbury, Indiana.  He departed for the European Theater of Operations on April 6, 1944, and two months later, on June 12th, Raymond was engaged in combat and was wounded in action.  He received several awards for his action including the Combat Infantry Badge, the Bronze Star and the Purple Heart.  He was discharged from the service on December 19, 1945.  While he was in the service, Orsene did play basketball for the “C” Company Team and won the 1st Battalion Championship while he was captain of that team.  He returned to Branford in 1945.  On August 24, 1949, Orsene was named a charter member of the Branford Disabled American Veterans which he was commander of for two years.

In 1957, Orsene began his illustrious basketball coaching career with the local CYO Basketball League.  Organized and formed by Father McSheffery, the CYO league consisted of eight teams along the shoreline area.  Orsene was the first coach for St. Mary’s of Branford hoops team.  He was also the basketball coach for the grammar school team and after eleven years at the helm, Orsene was part of seven championships.  For his efforts, on May 7, 1960, Raymond received the God and Youth Medal from the Catholic Youth Organization of the Archdiocese of Hartford.  Later in 1974, Orsene was named the director of the CYO league, which, at the time, was called the East Deanery CYO.  He was the director until 1988 and also assisted the cheerleading competition for the same organization.

Locally, Orsene has helped the town with many of its sports.  As well as coaching many basketball teams in the Frank Kinney Senior Basketball Tournament held at the Joe Trapasso Gymnasium, Raymond was an active member of the Branford Gridiron Club in 1960 and after 27 years was made an honorary member and president for two years.  Along with former high school coach Thomas Murray, Arthur Knapp and Richard Merrill, Orsene established the Branford Booster Club and in 1985 was appointed an honorary member of the New Haven Board of Approved Basketball Officials.  Noticing his efforts over the years, organizations such as the Branford Board of Education, Branford Recreation Department, CYO Basketball League and Cheerleaders, Branford Gridiron Club, and the Basketball Boosters, have commended him for his efforts.

After 28 years of service with the Postal Service and active member of various social and heritage clubs in the area, Orsene is married to Isabelle Havens and has two children Maureen and Kenneth, in addition to five grandchildren.  He now enters the Branford Sports Hall of Fame with his brother, Joe Orsene.

“This recognition means so much to me.  I’m up there in the Hall of Fame with so many outstanding athletes.  Even though I wasn’t an outstanding ball player, I guess my contributions in sports is what got me there.  It’s a great honor to me to be up there with some of the athletes I looked up to – it’s really great.”