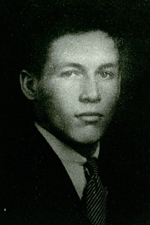 If someone went up to 1992 Branford Sports Hall of Famer Peter Naimo and asked him a question about his fine accomplishments on the athletic field and off it, chances were you might not have received a long response from him.  However, if you allowed Peter Naimo’s accomplishments to speak for themselves, the three sports athlete would have relished that decision because he was a man that enjoyed bringing honor and prestige to the town of Branford in his own subtle way.

Born on June 25th, 1917 in Branford, Peter “Rabbit” Naimo attended Branford High School and assisted the Hornets basketball squad toward a Class B state championship team in the 1933-34 season.  Falling ill during most of the 1934-35 season, Naimo returned just in time to lead Branford to another title and an opportunity against eventual Connecticut and New England champion, Meriden.  During the season, the Hornets won sixteen of the 23 games played, including eight of its first 10 games. Defeating Alumni (32-29), Hillhouse (36-32), Derby (24-14), Hillhouse (31-29), and Milford (20-15) in Branford’s first five games, the Hornets suffered its first loss to Stratford (24-21).  Later in that same season, the basketball team put together multiple winnings streaks of three games, four games, two games, and again three games respectively.  With an overall record of 17-5, the 1934-35 squad was considered among the five best teams in New England.  The Hornets had little trouble beating their Class B rivals – West Haven (28-23), Naugatuck (41-26), and Norwalk (36-18), before taking on Meriden High School in the Semi-finals of the Class A Tournament.  The eventual champions of Connecticut and New England that year, Meriden, did not have an easy run in the post season game, but did top Branford 32-28.

In 1938 and 1939, Naimo attended Villanova University on a scholarship and it was there that he injured his knee getting hit late on a play in a freshman-varsity football scrimmage.  Later, Peter returned to the area where he played semi-pro ball before joining the Navy where he served from 1942 to 1944.  Naimo played football professionally with the Bridgeport Pros and the Wallingford Walcos, where he teamed with 1988 Branford Sports Hall of Famer inductee Frank “Fritz” Petela.  In addition to football, Peter continued to play baseball on a semi pro basis, playing against the likes of Pee Wee Reese and Joe DiMaggio.  After his time served in the military, which included his involvement in the invasion of Normandy, Naimo was a powerful running back on the Branford Laurel’s football team where he was given his nickname, “Rabbit.”

At the young age 43, Peter Naimo passed away on June 8, 1961 of cancer.  Now as Peter enters tonight’s Hall of Fame, his son, Marshall, reflects what this induction would have meant to him.  “He would have been extremely honored to get this award.  He grew up in Branford and played sports in Branford so it would have been real exciting for him,” said Marshall Naimo.