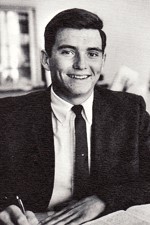 This well-known humanitarian may not have 2008 Branford Sports Hall of Fame inductee Peter J. Anderson in mind when she spoke these words but the sentiments clearly are appropriate for this tw0-sport athlete, outstanding businessman, and loving family man.

Peter was also a member of the BHS track squad where he excelled in the field events and was  class president for  four years. In addition to athletics, he served on the Branford High School Student Council, and was voted “Did Most for The Class” by his senior classmates.  After graduation, he attended the University of Vermont on a football scholarship, playing all four years and graduated in 1971 with a degree in Business.  After Peter’s graduation from UVM and his marriage to the former Deborah Hawthorne of Branford, on March 27, 1971, he started a small business from the basement of his apartment in Branford in 1974. Known as USI Inc., Peter’s fledging laminating business developed into a large international company with locations in Connecticut, and Arizona and overseas operations in China.

Peter was proud of his successful business ventures but even more proud of his family.  He was happily married to Deborah for 27 years until his untimely death in October of 1998.  The Andersons had three sons, Michael, Daniel, and Christian, all of whom followed tonight’s inductee in the sports arena. Michael played football for Union College from which he graduated in 1999. Daniel attended Dartmouth College where he started as a fullback and graduated in 2002, and Christian, went west to the University of Denver on a lacrosse scholarship and graduated in 2005.