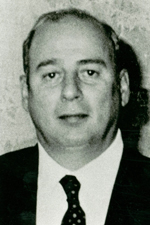 “For bringing honor and distinction to the town of Branford” has been the motto for the Branford Sports Hall of Fame since its inception in 1988.  Continuing to share in a trademark of excellence is a man who gave himself unselfishly as an athlete, a public servant, and as a Marine veteran – Peter Ablondi.

Born in Stony Creek on February 24, 1934, the son of the late Frank P. and Agnes Wallace Ablondi, Peter played baseball at Branford High School as a shortstop for fellow inductee Warren Sampson.  During the 1950 baseball season, the Hornets opened against Housatonic rival Derby, only to shut them out, 3-0.  Branford went on to defeat Shelton 6-5 and Derby again 12-11 while falling to opponents such as Milford, Wallingford and Derby according to the Branford High School Milestone Yearbook.  This 1950 team was considered one of the most talented teams to don Hornets uniforms due to the many experienced positions players Coach Sampson returned that year.  In 1951, Ablondi switched positions from shortstop to the “hot corner,” known as third base.  That year, Ablondi was a teammate of fellow inductee John McGowan.

Peter was also a member of the Hornets football squad.  During the 1951 season, Branford had a 4-3-1 record.  A back coach on Warren Sampson’s team,  Ablondi saw the Hornets top St. Mary’s 13-7 in the season opener, followed by a 25-0 rout over Rockville,  After suffering a loss at hands of Derby 13-2, Branford bounced right back, topping Wallingford 27-10 and Seymour, the following week, 14-0.  Branford finished the 1951 season with a 6-6 tie versus Milford, and losses to Shelton and East Haven.  Peter continued playing baseball with the American Legion squad in 1948 and later with the Branford Townies and the Branford Braves from 1949 to 1953.

After graduating from Branford High School in 1951, Peter attended Hopkins Grammar School, where he played football and was tabbed captain –elect for the 1952 season.  One year later, in 1953 Peter entered the United States Marine Corp and was a  veteran of the Korean War.  While in the Marines, Ablondi played football on the Hawaiian Marines team.

Ablondi continued his education in 1956 as he attended Paducah Junior College in Kentucky, where he played baseball for the school and later played semi-pro ball for two years with the Paducah Cardinals.  In 1958, Ablondi returned home and attended Southern Connecticut State College (University) and played baseball for coaches Gene Casey and “Doc” Moore in two seasons.  Peter graduated from Southern in 1960.

Off the playing field, Ablondi succeeded as a public servant for the town in many capacities.  From 1950 to 1963, Ablondi served as the Branford Recreation Department’s Assistant Director of Recreation, before taking the job as Town Clerk for 18 years (1963-1981.)  In 1981, Ablondi ran for First Selectman and won, holding the title until 1984.

A lifelong resident of Branford, Peter passed away on September 4, 1992 and is survived by his wife, Rosemary Tereschenko Ablondi and children, son, Steven, and daughters, Gale and Karen.

“He was very honored to be receiving this award.  He felt that he didn’t deserve it.  He was a very likeable person to all.  As an athlete, Peter was a team person – a good athlete,” said his wife Rosemary.