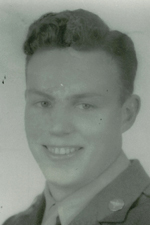 Opponents highlighted their scheduled games against all Branford High School teams during the late 1930’s, not because of anticipation but rather due to sheer intimidation of playing against athletes in the form of 1996 Branford Sports Hall of Fame inductee Paul Ward.  Tonight’s inductee was a masterful player who knew how to play the game only one way-with a sense of passion, class, intensity and dignity.

Born on November 23, 1920 Paul attended Branford High School from 1935 to 1938.  While there, he played football, baseball and basketball.  During his junior season, Paul and the Branford basketball team won the Housatonic League Class B Championship for the second consecutive year and entered the Class B tournament for the third consecutive season.  Branford challenged that Class A runner-up team that year, Bristol, for the right to represent Connecticut in the New England Tournament at Portland but were defeated 30-22 after a hard fought battle.  As a guard on the basketball team along with teammates 1993 Branford Sports Hall of Fame inductees Steven Hylinski, Joe “Butch” Naimo, John Yusievicz, 1995 inductees James Barba and Victor Lukawsky, Paul led the Hornets to a fine record of 15-4, including an eight game winning streak, and winning 14 of its last 17 games.  A year earlier, in 1935-36, as a sophomore, tonight’s inductee captured his first taste of championship stardom when Branford captured the Housatonic League championship outright against Wallingford and then defeated them again, this time for the state title, 29-17 and was crowned Class “B” Champions for the state of Connecticut.

In his senior season, Paul was an important part of Branford’s most successful basketball team in Branford High School history.  As the starting right guard, Paul and the Hornets brought home the only undefeated record in Connecticut.  Branford took home the Housatonic League Conference and Connecticut Class B State Championship, its third consecutive state championship in Class “B”.  That team , which included 1989 inductee Stan Petela, was the first squad to go through its season undefeated, winning twenty-one straight, and also the first year that  a Housatonic League winner had been defeated.

Paul also enjoyed playing football as a receiver and baseball as a catcher at Branford High School.  In his senior football season, the Hornets gained second place in the Housatonic Valley Conference, dropping only one league game.  As a baseball player he was directed by 1988 inductee Johnny Knecht, Jr.

After high school, Paul served in the United States Air Force and later returned to Branford to play football for the Branford Rams, baseball for many recreational teams, including the Branford Red Sox, which won a Shoreline League Championship and community league softball teams.  In recreation basketball, he played for the East Haven Jeffs, Branford Vets, Tisko, Telephone Company, East Haven Townies and Marlins which won thee state industrial championships as well as the eastern seaboard industrial championship.

Paul served as a Lieutenant for the New Haven Fire Department and was cited for numerous acts of heroism.  Tragically, he died on January 3, 1966, as he and his departed wife, Faye, left a son, John, who expressed his gratitude for this father’s induction into the Branford Sports Hall of Fame.  “To be here to accept entry into the Branford Sports Hall of Fame would have meant supreme satisfaction for him.  He loved the people of Branford and he would have been grateful to be inducted with other find sportsmen,” said John Ward.