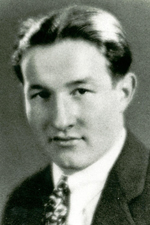 Whatever assignment or challenge thrown Paul Pauk’s way, one could expect that the 1991 Branford Sports Hall of Fame inductee would accomplish it with greatness.  From his days on the football field, the basketball court, and the baseball diamond at Branford High School to his remarkable accomplishments at Princeton University, Pauk made the town of Branford proud.

As a high school student at Branford, Paul served in many ways.  He was class president for four years, participated on the Freshman Dance, Sophomore Hop, Junior Prom, and Senior Reception Committees.  In the sports scene, Pauk was regarded as a mighty athlete who could do anything to help the team win.  As a member of the Branford Hornets basketball team for four years, Pauk led the high school team to a state championship in the Class C division and to a runner up position in the Housatonic League in the 1929-30 season.  Pauk was one of three Hornets named to the All-State team that year under the tutelage of coach Johnny Knecht.  Through six games, the Hornets were 4-2 but went on to win 10 of its next 11 games, including victories in the Storrs Tournament against Woodbury (26-19), Madison (23-16), and Putnam (32-6). For the season, Branford outscored its opponents 362 to 255.

As a senior and captain of the Branford varsity football team, Pauk led the Hornets to a second place standing in the tough Houstonic League.  In 1929, Branford started off with a record of 2-3 but capped the season off with four consecutive victories over Derby (the first win over a Derby football team), Stratford, Seymour (a 38-0 win), and Commercial under legendary coach Johnny Knecht.

Once Pauk graduated from Branford High School in 1930, he enrolled at Worcester Academy following in the footsteps of 1989 Branford Sports Hall of Fame inductee Stu Clancy.  After a few years, colleges all over the country yearned for the right to have Paul Pauk play for its gridiron team, but it was the Tigers of Princeton University under famous coach Fritz Crisler that claimed him.

As a three year varsity player, Pauk played halfback for the Tigers.  While there, Pauk and his teammates claimed a 23-1 record over three years ranging from 1933 to 1935.  In 1933, the Tigers had 9-0 record.  The following year, the Tigers only blemish was a 7-0 defeat to Yale University and in 1935, Princeton went undefeated again.  In game number four of the 1935 season, Pauk had yet another super game.  An eighty yard punt return and a three yard touchdown run enabled the Tigers to squash Cornell University 54-0.  Two games later against Harvard, Pauk scored two touchdowns en route to a 35-0 win.  In his senior season, the Tigers scored 256 points to its opponents 32.  Paul graduated from Princeton in 1936.

Passing away in 1941, Pauk is remembered by all, especially his sister Mary Morton.

“This award would mean a lot to him.  I know it would.  Being the type of person he was, he might feel as though he shouldn’t have that honor.” But as we all know, Paul Pauk is deserving of this award.