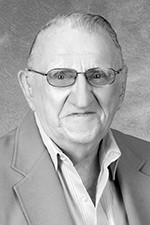 As a freshman, this inductee was a member of the 1937-38 basketball team which turned in one of the most successful seasons in Branford High School history. Under the tutelage of head coach and hall of fame coach John Knecht, Jr (1988), the Hornet Basketball Team brought home the only undefeated record in Connecticut.  Branford captured the Housatonic League Conference and Connecticut Class “B” State Championships. The 1938 state championship was the fourth consecutive title for Branford.  This team went through the season undefeated, won twenty-one straight and became the first in the Housatonic League which went undefeated. In the state tournament, Branford defeated East Haven (30-16), Plainville (53-28), and Windsor (37-18).  Branford scored the greatest total of points of any team in either Class “A” or Class “B” Tourneys (120 points) and also the highest score in any single game (53 points). In appreciation of their record, Branford rewarded the team with a trip to the New England Tournament at Brown University in Providence.  Bo played alongside fellow hall of famers Stan Petela (1989) Steve Hylinski (1993) Joe Naimo (1993), James Barba (1995), Paul Ward (1996), Albert Torino (1997), Stan Gumkowski (1998), William Proto (1999), and Joseph Yasevac (2004).

The following year, the 1938-39 team turned in another successful season, finishing in second place in the Housatonic League and with an overall record of 14-4.  Branford ran its winning streak to 38 consecutive games before losing to Seymour (25-21) in the fifth game of the season.  In the CIAC. tournament, the Hornets defeated Wethersfield 24-17, before falling in the second round to Manchester Trade, (44-40).

As a pitcher for the baseball team, Bo struck out 13 batters in one game during his sophomore season.  He was selected to play on the all-star Branford baseball team and made the All-Star Shoreline team. While still in high school, Bo played baseball for the Branford Blue Devils and the Hustlers of Branford and in basketball, he played for the East Haven Jeffs.

On September 20, 1942, he enlisted in the United States Navy and proudly served his country as a Navy Seabee where he operated heavy equipment and was a First Class ship fitter. He was stationed in Guadalcanal, Russell Islands, Green Island, and Peleliu.  His unit was awarded the “Asiatic-Pacific Area Medal”, the “Silver Star”, “Bronze Star”, “Presidential Unit Citation”, “Navy Unit Citation”, and the “”World War II Victory Medal”.   Bo was honorably discharged on October 13, 1945 and returned home to start Paul’s Welding Service, Inc. in East Haven, which he owned and operated until his retirement in 1962. The company was known for building bridges throughout New England and New York.  On September 19, 2006, tonight’s inductee was awarded a “Certificate of Accomplishment” for his honorable service to the nation.

After the Navy, Bo continued to play sports, including basketball, bowling, and softball for Saint Casmir’s of New Haven for many years.   He is presently co-president and treasurer of the 33rd Seabees and an active member of the American Legion Post #89, Branford Elks Lodge #1939 and the Knights of Lithuania.