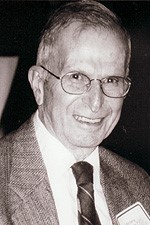 For 2007 Branford Sports Hall of Fame inductee Paul J. Birbarie, the sport of soapbox racing provided an opportunity of success and notoriety spanning a period of 18 years.

Born on March 10, 1922, Paul grew up in Branford and took an interest in soapbox derby racing at the early age of 14.  He captured a first place trophy in the New Haven Soap Box Derby and on August 1, 1936, tonight’s inductee was selected out of 150 entries to compete in the International Soap Box event in Akron, Ohio.  His model finished third, in the fastest heat of the day, only three-fifths of a second off the world mark.  At age 15, he became interested in amateur midget outboard motor racing and took first place by winning two races in New London, Connecticut.  By 1938, Paul was breaking many records with his Hornet in the midget class. In no time, he was rocketing himself to victory in his three watch charm boats, the “Hornet”, the “Baby Hornet”, and the “Connecticut Kid”. In addition, he piloted a Class A creation, the “Dipsy Doodle.”   Paul became interscholastic champion, racing under the Branford High School colors and later, when he attended New Haven Teacher’s College (1940-42), he captured the intercollegiate crown.

The big names of the sport respected him for his ability and insisted on his presence at one of the largest meets, the Hearst Invitation, held at the World’s Fair Grounds in New York City.  Paul traveled the length of the East Coast, meeting all comers in the midget class. He sought and won all of the major titles and stood as the lone M craft driver to finish the journey down the Hudson River in 1941, competing against the world’s best drivers. Paul would continue on to conquer many state, regional, and national championships in addition to setting numerous speed records and winning his class in the 1949 Albany to New York marathon in a homemade 8’ hydroplane.

In 1940, he became Junior Class President and was editor of the “Hornet” school newspaper.  Paul volunteered his time with the Class Book Committee, the Service Squad, Public Speaking Club (President) and took part in the Senior Class play.  His classmates voted him “Class Optimist” and “Most Dependable.”

Following high school, Paul joined the United States Army Air Forces in 1942 and was discharged in March of 1946 as Rank Sergeant.  He became a flight officer with the Air Transport Command and later a crew chief and Link Training Instructor.  In 1946, Paul and his brother, Nick,  founded their company, Birbarie Marine Sales, where Paul continues to work after 61 years of service and where he ran the retail and repair facility.

Paul is still an active member of the Branford Trinity Church, American Legion and is the founding First President of the Connecticut Marine Trades Association. He is married to Natalie Robinson Mahon, and the father to son, George (Skip) Birbarie and daughter, Melinda Susan.  He is also the grandfather to Nicole and Hannah Kahl and Lauren and Austin Birbarie.