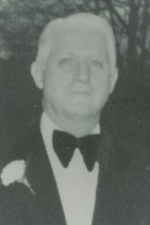 Rather than arouse the opponent’s ire by speaking out-of-character, 1995 Branford Sports Hall of Fame inductee and gentleman Pat McGowan allowed his skills on the football field, the basketball court and the baseball diamond to converse for him.  Throughout his athletic career at Branford High School, McGowan’s efforts deafened any challenges initiated by an adversary.

Born in Branford on March 19, 1910, Pat attended Branford High School from 1924 to 1927 and was a teammate of 1992 Branford Sports Hall of Fame inductee Adolph Mischler.  He played on the freshman basketball team as a forward before moving to the varsity squad.  In 1926, the Branford Hornets and in particular, Pat, began to show signs of things to come on the hardwood floor. Playing one of the toughest schedules around the state of Connecticut, Branford earned respect from visiting coaches, players, and fans.  That year, Pat and the Hornets met and defeated some of the largest and best school teams in the state.  Out of twenty-four games that season, Branford posted 15 wins and lost nine.  Those most notable victories for Branford that year came against Wilby High School of Waterbury (16-15), West Haven High School (21-15), Congress High School of Bridgeport (45-20), and the eventual champions of the State of Connecticut, New Haven High School (21-20).  The team was chosen to take part in the Interscholastic Championship of the State for the Class C and D teams held at Storrs College.  Terryville eliminated Branford in a very close game, 23-17.  Pat lead all scorers that year with 263 points.

In the following season, Branford accomplished a feat no other team in the history of Branford could do at the time-win both a Housatonic League and State Championship title in that same year.  In 1927, the Hornets won 16 and lost five with its Housatonic League record of 11 victories against one defeat standing as one of the best records in the state.  In that state tournament held at the Connecticut Agricultural College, Branford won three games, topping Putnam, Killingly and Leavenworth.  As captain of the team, Pat scored 249 points and teammate Mischler netted 203 points.

Pat also played football as a halfback on the 1926 team which relished a 3-2-1 record.  During the summer, he played baseball for the Hornets as the third baseman.

After graduating from Branford High School in 1927 and being voted “Most to be Admired,” tonight’s inductee went to Yale University and played both basketball and baseball.  He played with Albie Booth while with the Bulldogs and was a co-captain of the basketball team during the 1931-32 season.  He was a lieutenant in the United States Navy during World War II serving on the liberty ships S.S. Jeremiah O’Brien and S.S. Harold Pratt.  Pat taught History and English at Branford High School, served as the Assistant Personnel Officer at the Veteran’s Hospital in West Haven, Tax Collector for the town of Branford and worked as a member of the Federal Government.

Married to the former Frances Deegan, Pat was the father to two daughters, Patricia Halloran and Sharon Bassermann and the grandfather to Maura, Gregory, and Brian Halloran, Michael, Patrick, and Stephan Bassermann.

Pat McGowan passed away on March 28, 1986 at the age of 76.  “We are very honored to receive this award on behalf of our father.  This adds to many great memories we have of him as a gifted athlete who held a great love of sports in his hometown of Branford,” said his daughter, Sharon Bassermann.