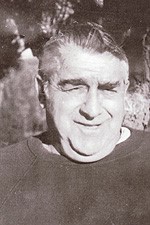 In an era that was greatly influenced by the dark early years of World War II, when America’s fortunes weren’t good, 2007 Branford Sports Hall of Fame inductee Pasquale Proto provided a necessary “spark” with his winning attitude, a reassuring spirit and a genuine smile on the athletic field and within the community.

A forward on the Branford High School basketball team during the 1939-40 season, “Patsy”, as he was known by many, led the Hornets to a Class B play-down birth, only to fall short to Manchester Tech, 37-36.  Branford finished the regular season with 10 wins and seven losses.  The following season, Branford had one of its most successful seasons in several years, crowning itself the Housatonic League champions by winning 18 out of 22 games and winning the Class B Tournament. During the season, he played with 1997 fellow inductee Tony Hynovich.  During his senior year, “Patsy” helped Branford to a second place finish in the Housatonic League, ending with nine victories and five defeats.  However, more importantly, the Hornets claimed the Class B State Championship defeating Woodrow Wilson by a score of 41-35.

In addition to his talents on the hardwood floor, tonight’s inductee displayed his athletic prowess on the football field and as a shortstop on the baseball diamond.  Off the field, he  was voted “Most Popular”, “Class Hero”, “Happy-Go-Lucky”, “Faculty Joy”, and “Most Talkative” by his classmates.

Following high school, “Patsy” entered the United States Army and was in World War II.  When he returned from the service, he went to work at Algonquin Industries as a shipping clerk for 17 years.

As a civic contributor, he was a past member of the Branford Elks Club and was a long-time softball umpire and basketball referee for the Branford Recreation Department.  “Patsy” also played baseball for the International Silver Baseball Team.

Survived by his daughters, Nancy, Elizabeth (Betsy) Gage and son, Paul, “Patsy” was the grandfather to Michael Ammann and Amanda Gage.  He was the husband to the former Katherine Prahovic Proto. The inductee joins his brothers, Anthony “Tony” (1998) and William “Willie” (1999), into the Branford Sports Hall of Fame.  Sadly, he passed away on July 20th, 2004.