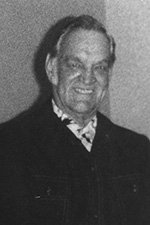 All athletes regardless of the level of competition, ultimately make an extreme sacrifice for many reasons.  The team.  The community.  Perhaps, for the individual himself.  Tradition quite  possibly was never better defined than in 1997 Branford Sports Hall of Fame inductee Nick Dykun, an individual who worked diligently for his family, strove to better his football teammates and was part of an athletic family icon, along with his three brothers, which made Branford proud to have them in this Shoreline community.

Born in New Haven on November 11, 1912, Nick was a superstar on the football gridiron. Faced with having to work at an early age of 14, Nick earned his education during night school and was still able to participate in the sport he loved with a passion.  Nick joined the Branford Laurels and played for a while under 1990 Hall of Fame inductee and Coach Robert S. Kelly while his brothers played with the Hornets squad.  Mike was a member of the 1927 squad as tackle and played with 1991 Hall of Fame inductee Paul Pauk.  Following in the Dykun tradition was brother, Walter, who also played an established position of tackle while the third brother, Johnny, claimed the backfield as his domain on the football squad.  It was with the Laurels that Nick saw action on the offensive line and was part of many undefeated seasons with the club.  Nick was an athlete who could take on a terrific beating and still never quit.  He was fast and a quick learner.  Paired with men like Pat McGowan on one side and 1998 Hall of Fame inductee Chet Tisko on the other, he soon became an important component in the Laurels success.  After the Laurels unexpected break-up, Nick continued to play football on the professional scene with the Hartford Blues in 1942, which included 1988 Hall of Fame inductee Frank “Fritz” Petela as his teammate.

Off the playing field, Nick worked as a foreman for the U.S. Steel Company in New Haven for 38 years, retiring in 1983.  He was a member of the Knights of Columbus and the Elks Lodge 1939 in addition to being a Religious Instructor for St. Mary’s Parish and an usher at St. Mary’s Church.  Married to his wife, Julia Tamsin Dykun for over 50 years, Nick was the father of two daughters, Stephanie Maselli and Beverly Austin, and one son, Nicholas Dykun Jr..  Sadly, on August 21, 1985, at the age of 72, Nick Sr. passed away.  “He would have been so happy to receive this award tonight if he was here.  He loved the Branford Laurels, he loved Branford and he loved sports.  Nick played everything when it came to athletics.  He would have been honored by his induction into the Branford Sports Hall of Fame,” said his wife, Julia.