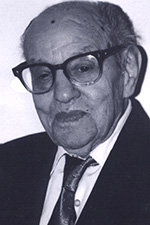 Today’s athlete can only dream of being half  the player that 2000 Branford Sports Hall of Fame inductee Michael “Mickey” Thomas was in his days on the baseball diamond.  Rugged. Competitive.  A good sport.  Throughout the state during the 1920’s, one couldn’t have found a better second baseman than tonight’s inductee.

Reared in a sports-minded family, Mickey along with his brothers Jim, Louis, Armand, and Emile played wherever opportunity appeared.  In his late teens, Mickey played basketball and baseball in Sarasota, Florida.  Playing spring  baseball with the New York Giants, he was offered a contract in the New York State League upon returning to Branford but he declined the invitation.

In the late 1920’s, Mickey played second base for the Anchorage Farm Club of Pine Orchard.  As its lead-off hitter, he batted for a high average and fielded his position at second base flawlessly.  With Anchorage, he was a captain of the team and played teams throughout the state, compiling records of 29-4 (1928) and 22-4 (1929) while taking the National League of New Haven Championship  in both years. The big game of each year was the local “World Series” against the Branford Town Team of the Middlesex League.  Anchorage won in both 1928 and 1929 with Mickey going three for four and scored two runs in the game in 1929.

During an eight year span, spanning 1926 to 1934, Mickey captained the Anchorage Farm Club and the East Haven Andies, in addition to playing for the Branford Townies.  In basketball, he played guard with several teams in the Branford Fraternal League helping to win championships.  He also played football for the Annex and loved unorganized boxing. Teammates on these teams included current Hall of Famers: Stu Clancy (1989), Walter “Klinky” Klarman (1989), Frank McGowan (1989), Alfred “Doc” Aguzzi (1989), and Adolph Mischler (1992).

In 1934, Mickey suffered a career ending broken leg in a baseball game against the Townies.  Later, in the 1950’s,  Mickey and his siblings continued to support sports in Branford by sponsoring the Armand Thomas Memorial Trophy presented to the winner of the Branford Annual Softball Tournament. He also played and sponsored a  Cherry Hill  bowling team in the early 1960’s.

Professionally, Mickey was a mason, starting with brothers Jimmy and Armand and then his own business.  He also worked concurrently at night for the Connecticut State Highway Department for 28 years retiring in 1960, when he continued his masonry business until the early 1970’s.

He was a two-term Sachem in the Redman Pawson Tribe, a twice-elected Grand Knight and life member of the East Haven Knights of Columbus and a member of the Branford Exchange Club.