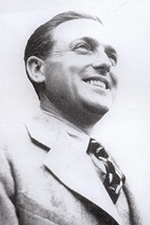 Steady.  Motivating.  Devoted.  These were some of the traits that best described 2001 Branford Sports Hall of Fame inductee Mellen E. Bigelow, who was a major contributor to recreation events in the town of Branford.

Mel and his twin brother Jim were born in Branford on June 3, 1905.  At a young age, Mel was a steady worker.  His employment included the Spaulding Drug Store in town, delivering for a local  bakery – the Rockbestos Company in New Haven, and reading meters for Connecticut Light & Power before he went on to school to become an electrician working for Bigelow Electric.   At age 17, Mel and twin brother Jim embarked via bicycle on a 200-mile round trip to Vermont.  In the 1930’s the, brothers sang on Station W.E.L.I.   The “Bigelow Twins” were popular over the airways and continued singing harmony in the various variety shows during the World War II while serving in the Connecticut State Guard.

Active in the Town of Branford, he was one of the first volunteers to help the Recreation Director and fellow Hall of Fame inductee Joe Trapasso (’88) implement new programs to the town.  He assisted in setting up weekly block dances at Branford Point and Hammer Field and Sunday nights band concerts on the town green.   Mel aided the Branford Recreation Department’s McDonalds Family Movie Program at Foote Memorial Park and was a major contributor in the set-up for the first Branford Community House.  The Annual Branford Italian Festival, an event which raised funds for special education programs was aided by Mel’s hard work and dedication.

Tonight’s inductee was a strong motivator during the reorganization of the Branford Townies Baseball team, which was active for a number of successful seasons.  He would  successfully solicit financial support from local businesses for uniforms, never taking no for an answer and he helped fix Hammer Field in 1951 for the Townies. Mel was an important factor in installing outdoor lights for the outdoor basketball court with the Branford Lions Club and assisted the Community House in installing lights at the outdoor tennis courts.  Mel  organized  the outdoor pro-wrestling show at Hammer Field for the new Community House.   In his honor, the Branford Recreation Department dedicated the Hammer Field grandstands to him.

Mel was devoted to the Trinity Episcopal Church on the Green.  He served in many capacities  such as tenor in the choir, electrician at the church fairs and  organized the Brotherhood of St. Andrew’s.

Mel was married to the former Marjorie M. Sawyer and was the father to Melvin, Joan, Elaine, Kenneth, and Wayne.  Sadly, tonight’s inductee passed away on June 25, 1985 at the age of 80.