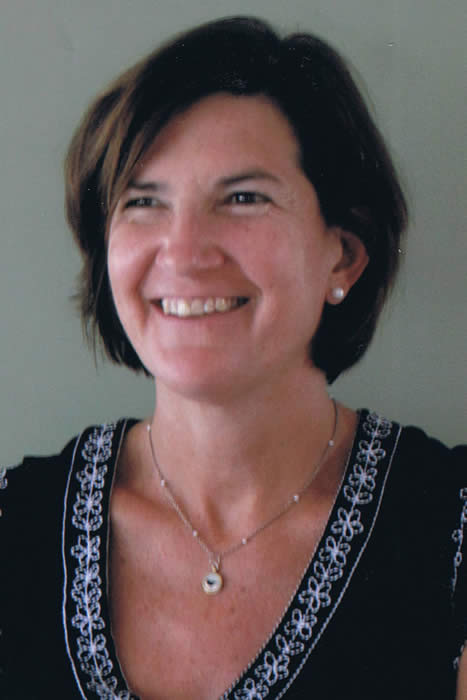 Margaret “Meg” Clapp Frazier has Branford sports blood coursing through her veins. Her grandfather Charles “Buck” Jones and aunt Barbara Jones Crimmins have both been previously inducted into the Branford Sports Hall of Fame. Like so many other female athletes inducted into the Branford Sports Hall of Fame Meg was an outstanding student as well. A National honor Society member who was the class Valedictorian in 1983, she received many academic honors including the Hugh O’Brien Award, the D.A.R. Award, the Rotary Club Citizen-Scholar Award, and the New Haven Tap Off Club Scholar Athlete Award. After BHS she received her B.A. from Dartmouth college in 1987 and pursued further studies at the John F. Kennedy School of Government Leadership at Harvard.

After spending time as a legal assistant for the Food and Drug Practice/ Litigation Group Meg has spent most of her professional career in private school secondary education in the Washington, D.C. area. She has taught both Spanish and American and ancient history and has been both history department head and has served as the director of college counseling at two different schools. She is currently the academic dean at Georgetown Preparatory School in North Bethesda, Maryland, where she has worked since 1999. From hiring and evaluating faculty to being a presenter at local and national conventions, to volunteering in home building for Haitian refugees to being the basketball coach of the Maryland Special Olympics Unified team, from a semi-finalist for the White House Fellows program to a tester for three cookbooks this Renaissance women does it all. Meg now shares her life with her husband Donald Frazier, sons Nathaniel and Andrew and daughter Alyson.

Along with fellow 2012 inductee Robin McColl Axtell, Meg was a huge part of the renaissance of Branford field hockey in the early years of Hall of Fame coaches Cathy and John McGuirk. Cathy McGuirk’s immediate reaction to what first came to mind about her as a player was “ confident, skillful, aggressive, and a leader.” Meg’s life story verifies that assessment.

In Meg’s sophomore year the team reached the semi-finals of the state tournament for the first of what became sixteen consecutive semi-final appearances. She was not only a varsity starter for the first three of those teams but was the teams leading scorer. In the process she set the single season and career scoring record ( since broken ) of 15 and 37 and helped the team win it’s first Housatonic league title. Meg was honored by making the All-Housatonic team in both her junior and senior years. In the years when one All-State team represented all of Class L, M, and S, Meg was a third team selection. Meg was chosen as captain her senior year when the team went 11-3-4 and had a 35-11-9 record during her three years as a starter.

Meg was also an outstanding basketball player at BHS. She was a three year starter on a team that was not only highly successful but generally recognized as the best girl’s basketball team in Branford’s history. She was the sole captain her senior year of the undefeated 1982-1983 Class L State Championship Team ranked first in the Connecticut state poll and fifth in the nation by Parade Magazine. Always an unselfish player and one not afraid of contact, Meg led the team that year in both assists and foul shooting. Hall of Fame coach Dave Maloney remembered how Meg, on a team with All-American players, was the only player whose versatility and ability enabled her to effectively play all five positions, a very difficult feat. Scoring over twenty multiple times the All-Housatonic league player at Branford continued her involvement in basketball by coaching two different girl’s middle school teams and volunteering in other basketball activities.