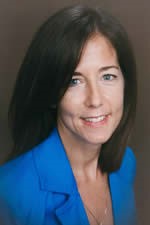 Meaghan Conte McHugh is one of four children born to Dr. Harry C. Conte and his beloved wife Kate. The couple raised Mary Kate, Elizabeth, Meaghan and Brian in Branford where all four were excellent scholars and athletes at Branford High School.

Meaghan participated in field hockey and tennis. As a member of the field hockey team, she played left wing for Hall of Fame coach Kathy McGuirk (1994). During her senior season, Meaghan was one of the team’s leading scorers along with Andrea Amendola Steady (Hall of Fame Class of 2004) and Christine Esposito. The Hornets finished that season with a 13-1-1 record. On November 16, 1985, Branford defeated Stonington to win the Class M State Championship. For her efforts, Meaghan was selected as All Housatonic Honorable Mention.

This inductee was also a four year standout for tennis Coach Bill Previdi. As a freshman, she played on the varsity level along with her sisters Mary Kate (1984) and Elizabeth (1985). Utilizing her quickness, overall skills, and endurance, Meaghan was able to win 75% of her singles and 80% of her doubles matches during her high school career. The team’s overall record during that time span was 50-8. Amazingly, all three Conte girls were tennis captains during their senior seasons.

Academically, Meaghan was an outstanding student. She was consistently on the High Honor Roll. As a result of her devotion to her studies, she was a member of the National Honor Society and she was a Student Council officer. Along with All State track star John McGowan, she was selected to represent Branford as a Connecticut High School Scholar Athlete.

Following high school, Meaghan attended Holy Cross College where she graduated in 1990 with a degree in economics and a minor in German. She continued her education at Johns Hopkins University, graduating in 1998 with a Masters in Public Health.

Professionally, tonight’s inductee has helped and touched many lives. Working in the public health field, she has run health programs in Asia, Africa, and Latin America. She has worked for Special Olympics International and she currently serves as the Clinical Director for Health Promotion for Special Olympics Maryland. Today, Meaghan helps youth and medically underserved populations as a tobacco addiction specialist in the Washington D.C area.

Meaghan has continued her passion for the sport of tennis. Since 1994, she has been an active member of the United States Tennis Association in the states of Virginia, Wisconsin, Louisiana and Maryland. In 2001, Meaghan and her team captured the Wisconsin Mixed Doubles Tennis Championship. Today, she is involved in the Quick Start Tennis program along with her children.

Meaghan and her husband Maurice have been married since 2000. They met while he was finishing his dissertation for his Ph.D. in climatology. Maurice is an Irish national and he and Meaghan enjoy visiting his large family each year in Ireland. The couple’s son, Declan, was born in 2002 in Watertown Wisconsin.  Their daughter, Maggie, was born in Baton Rouge, Louisiana in 2004. Both children enjoy dual citizenship.

The McHugh family survived Hurricane Katrina in August of 2005. During the aftermath, Meaghan volunteered at a local hospice. Today, they live in Potomac, Maryland.