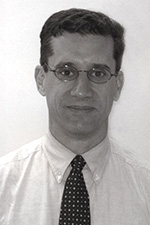 Numbers have played a significant and honorable  part in the life of 2002 Branford Sports Hall of Fame inductee Mark Loftis.  Whether it was as a record-setting high school and college swimmer, or as an educator, tonight’s inductee attained high achievements representing his community, his teams, and himself.

Mark started to compete in swimming for the Branford Sting Rays in 1972, when he was in the fifth grade, at which time, marked the first-year of the swim club program.   His most outstanding swim before high school was in eighth grade when he qualified for age groups in the 500 freestyle.

In 1975, he entered high school and became the most dedicated swimmer to date in Branford High School swimming history.  He practiced daily with both his USS team, where one of his coaches was George Miles and the high school team, under the direction of another Hall of Famers John O’Connor (1995). During his junior and senior seasons, it was customary to see Mark finish his high school practice at 5:00 p.m. and then go to a USS practice immediately.  He set a standard for all future Branford swimmers. In his junior year, the swim team boasted a final record of nine wins and three losses, finishing in third place in the Housatonic League -its best season ever.  It was during this time that Mark was the state champion in the 500 yard freestyle.

After graduation from Branford, tonight’s inductee went to Yale University and continued to improve and set three school records in the 500 free, 1000 free, and 1650 free as a four-year letter winner from 1980 to 1983.  In 1981 and again in 1983, he was named the recipient of the Heaton High Point Award for scoring the most points in dual meet competitions.  His time in the 500 free was 4:28.  At every meet at Yale, he would swim the 1000 free and then the very next event the 200 free.  Later he would compete in the 500.  Mark graduated from Yale in 1983 and then trained for the 1984 Olympics.  He was ranked in the top eight in the United States in the 800 meter freestyle and was a member of the 1981 United States National Team, that competed internationally in the Netherlands and Paris.

Today, Mark is the head of  the math department at Riverdale Country School in Bronx, New York.  In 1996, he earned the Edyth May Sliffe Award for Distinguished Junior High School Mathematics Teaching, was  a member of the National MATHCOUNTS Coaches Advisory Council from 1997 to 1999, and the middle school and high school math coach. He helped place one student on the United States Olympiad team that competed in the International Mathematics Olympiad.