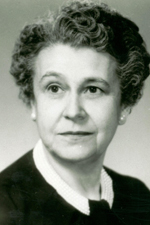 One look at the numerous programs offered to the community by the Branford Recreation Department today can be traced back to the efforts of many influential people, including 1992 Branford Sports Hall of Frame inductee Mandana Armstrong.

After receiving her Bachelor of Arts degree in History from Wheaton College and her M.A. degree in Biology from Brown University, Mandana taught in private schools in New York and South Carolina before her marriage to Fredrick Armstrong and her move to Branford.

While in town, Armstrong was a substitute teacher in the Branford school system teaching everything from Latin to Biology and Metalworking.  When fellow 1992 inductee Warren Sampson dies unexpectedly in 1952, Mandana stepped in as the boy’s Physical Education teacher in addition to teaching Science.  Following her efforts, Mandana was given the affectionate nickname, “Coach,” from her students.

In 1957, Armstrong was recognized by the National Recreation Association for her outstanding contributions to community recreation and was elected honorary member of the New England District Advisory Committee.  Mandana and 1988 Branford Sports Hall of Famer and current Director of Recreation, Joe Trapasso, assisted many communities in setting up full time recreation departments.  She also served on the new Community House Building Committee and assisted in raising funds for its construction.

In addition to these fine accomplishments, Mandana played vibrant role in organizing the Golden Age Club in 1951, one of the first senior citizen programs in the country.

Mother to four daughters, Mary, Dana, Nancy, and Betsy, Mandana served the town with pride and honor and in her own quiet way according to Betsy Demir, one of the Mandana’s children.

“I think she would have been thrilled in receiving this award.  She was a humble person in that she just went along and did things.  She put in an inordinate amount of hours and didn’t expect to be repaid for them.  We are thrilled that she is getting this award and that people remembered her,” said Demir.