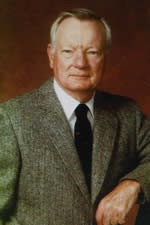 Macgregor Kilpatrick was a man of many interests and talents.  He was an accomplished athlete, a college All America, a decorated war hero, a trusted attorney and town leader, a successful entrepreneur and an American Hockey League executive.  He was respected and loved by all who knew him.

Born on July 30, 1916 to Bill and Fannie Kilpatrick, his family, including younger brother Bill, Jr., settled in Ardsley, N.Y. attending the public schools.  Here he became skilled in baseball, golf, soccer, ice hockey, swimming, and sailing. In Ardsley, he met Ruth Lawrence who was later to become his wife.

Mac always wanted to fly.  His ambition was to go to the U.S. Naval Academy and eventually become a pilot.  At the Naval Academy, Mac was a top student and an All-America soccer player, graduating in 1939. Following graduation, he and Ruthie were married and he was stationed in Pensacola for training as a Navy pilot; both events were pivotal in his life.

In World War II, Mac served on three aircraft carriers: the Enterprise, the Franklin and the Intrepid.  Each was bombed or torpedoed while he was aboard. His service record includes the Distinguished Flying Cross, the Air Medal and a presidential citation.

Most impressively, Mac earned the Navy Cross, the Navy’s highest commendation, for his actions aboard the Franklin. With the ship in flames, Mac leaped aboard a descending flight-deck elevator and jettisoned munitions that would have destroyed the ship had they exploded.

At war’s end, Mac moved his family, including daughters Susan, Jane and Polly, to Branford and enrolled in Yale Law School, graduating in 1950. Soon he formed the law firm of Kilpatrick, Kahl & Josephson. Mac was elected Branford’s Town Moderator and Probate Judge.

Maintaining his love of, athletics, Mac took up golfing again, returned to sailing and regularly could be seen skating on Young’s Pond.

Mac was a successful entrepreneur and became a major player in the development of Silly Putty and Moxie, a well known soft drink.

Ice hockey was another of his interests. New Haven’s American Hockey League team was disbanded in 1951. In 1972, Mac and two partners obtained the franchise for the New Haven Nighthawks of the League. He became its president and later joined the American Hockey League’s board of directors, serving as vice-president and general counsel, an association that lasted 27 years. Just before his death, Mac was honored by the League when it named the regular season championship trophy the “Macgregor Kilpatrick Trophy.” Another of Mac’s proudest achievements was his contribution to establishing Foote Memorial Park.