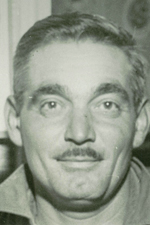 In Aceto’s junior year, the 1931-32 squad made quite an impression on its rivals by compiling a 10-7 record despite the move to the Class “B” division.  Coach John Knecht Jr. made the schedule much stronger by adding two games each with three city district “A” schools, Hillhouse, West Haven, and Commercial.  That year, the Hornets finished in second place in the Housatonic League.  Aceto captained the 1932-33 squad and played with the likes of 1988 inductee Frank “Fritz” Petela, Bob Donnely (1989), and Stan Sokolosky (1990).  After graduating from Branford High School in 1933, Aceto continued to play basketball.  That year, he played on the Branford Review team with Heb Williams, Pete Naimo (1992), and Stan Sokolosky.  Later, he was part of the “Branchini Big Five” basketball team and the “M.I.F.” basketball team with 1989 Hall of Famer Alfred “Doc: Aguzzi and Stan Sokolosky.  Aceto transferred his basketball knowledge to the coaching box as he managed a women’s team, known as the “Ashley Shirt Team”, which included 1990 Sports Hall of Fame inductee Eleanor Laich Schmitz.

As a resident of Branford, Aceto worked at the Malleable Iron Fittings and at the Giordano Construction Company as a supervisor/foreman.  Louis also played the role of “Uncle Sam” for the Stony Creek Fife and Drum Corp.  He married the former Jenny Carrubba on June 14, 1937 and fathered four sons: Tony, Vincent, Louis and Robert.  Aceto passed away in Hamden on September 17, 1959.  “This award means a great deal to our family.  We only knew him for a short period of time but during that time he would always talk about sports.  He was a real gusty player, a no-quit type of guy who strove for perfection,” said his son, Tony Aceto.