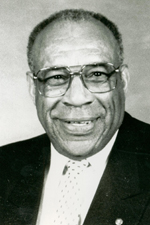 In every avenue of athletics, academics, military, and corporate business, Levi Jackson has left his mark of excellence and success to many around him.  Whether is was his swifty moves as a halfback for Hillhouse High School and Yale University, or his accomplishments at his job in the Ford Motor Company organization, tonight’s Branford Sports Hall of Fame inductee gives his time to several affiliations for the well-being of others.

A graduate of Hillhouse High School, Levi played halfback for his high school team, receiving All-Connecticut recognition for his efforts as well as being elected captain in his senior year.  From January of 1945 to July 1946, Levi served in the United States Army Quartermaster Corps on an 18 month tour of duty before returning to New Haven and attending Yale University.

As a freshman with the Bulldogs, Jackson was awarded the George Bulger Lowe Trophy, recognizing the top college player in New England.  One of his many feats which earned him that award was his 86 yard touchdown run against Ivy League rival, Columbia.  In 1949, Levi was named the football’s team 70th captain, largely in part to his running prowess and his ability to play in pain.  Levi’s coach at the time, Herman Hickman, described Jackson as a “remarkable athlete,” who could reel off all-the-way-gains and throw a fine pass as well as punt with the best in the nation.  In 1950, Levi graduated from Yale with a Bachelor of Arts Degree in Sociology, Economics and Psychology.

In addition to his success in school and in football, Jackson was determined to ascend in one other area of life- the corporate business world.  Beginning in 1951, Levi worked for the Ford Motor Company for the next 32 years before retiring on January 1, 1983.  While employed there, Jackson received several awards for his efforts.  In 1968, Levi was given the Ford Citizen of the Year Award, the highest award in the corporation, for community service.  Jackson was cited for his civic, educational, and spiritual work.  A year later, Levi was appointed as chairman to the National Selective Service Appeal Board by President Richard Nixon, and later he served on the President’s Commission on the White House Fellowship.  Apart from that, Levi has been involved with other affiliations including Springfield College, the Detroit Medical Center Corporation and Children’s Hospital as a trustee, and he was chairman of the trustees of Detroit’s Kirwood Hospital.

In 1987, Jackson returned to New Haven to accept his award as the 1987 Walter CampFootball Foundation’s “Man of the Year Award,” and now in 1991, Levi returns to Branford via Detroit, Michigan, to accept yet another award – an induction into the Branford Sports Hall of Fame.

“Even though I moved to New Haven during World Ward II, when I drove by Branford, I was proud to call Branford my home town.  Getting inducted is just great. To be mentioned in the same breath with Heb Williams, Joe Torello, and George “Battler” Laich (who all played football for the Branford Laurels at Hammer Field), I feel real good.”