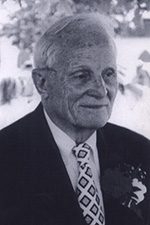 Throughout his lifelong residency in Branford, 2000 Branford Sports Hall of Fame inductee Leonard “Cupie” Tamsin provided a blue-print for many in the town to follow, on teamwork, reliability, honor and pride.

Born November 6,1919, he attended Branford school and graduated from Branford High School in 1937.  Working while in school was common during the era, and after graduation he joined Nutmeg Steel until the War broke out.  He served in the U.S. Airborne from 1942 to 1945.  He joined U.S. Steel after the war retiring in 1980 after 39 years of service.

While in the military, he was an exhibitionist jumper for Prime Minister Winston Churchill in England and was part of the Camp McKall Dedication in North Carolina and enlisted at Fort Devins, Massachusetts.  He won numerous awards including: Combat Infantry Badge, two Bronze Stars, two Purple Hearts, four Battle Stars, and two Presidential Unit Citations.

During the 1940’s, Cupie  was a member of two football teams in Branford, the Branford Laurels and the Branford Rams.  An avid bowler, Cupie competed in many Branford leagues and won four league titles.  In May of 1942, he won the Doubles Title in the state tournament with partner Arthur Doolittle,  with a national record of 850 for a six game set. While with the Laurels and Rams, he was a teammate of current Hall of Fame inductees William Panaroni (1988), Walter Tamulevich (1990), James Barba (1995), and Paul Ward (1996) and coached by Nick Weted (1988), and Stan “Socko” Sokolosky (1990).

A forty year community service man to the Branford Fire Department as a volunteer, Cupie has been married to Dorothy Raiola since October of 1948,  recently celebrating their 53rd wedding anniversary.  He  is the father to three children: Michael, Mark, and Leonard, Jr.