Inductees by NameLeona A. Peterson 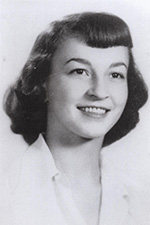 Off the playing field, 2001 Branford Sports Hall of Fame inductee Leona A. Peterson was always identified  by her  energetic smile, her friendly personality, and her clever wit.  Once her attention turned to athletics, opponents witnessed a determined team player, a passionate leader, and an outstanding role model.

The daughter of Alice Taylor and Arnold Peterson, Leona was born on December 31, 1931 and grew up in the Short Beach section of town. As a member of the Branford High School class of 1949, she was actively involved  in athletics and other school  activities.   Leona was a cheerleader, serving as captain her freshman and senior years, captain of the field hockey team , a member of the Girl’s Athletic Association, serving as treasurer and secretary,  and played intramural sports throughout high school.

During her junior year, Leona  was a member of the girls’ field hockey team , which at the time was comparatively new.  In her senior season, Branford, in its lone game of the year, defeated Guilford by the final score of  3-0.  In that game, Leona scored one of the team’s goals.   As part  of the Hornets hoop squad,  “Pete”, as she was nicknamed in high school,  played on an undefeated team in 1948-49.  In six games, Leona was high scorer  in two of  them , netting  eight points in a win versus Guilford and six points versus St. Mary’s. Tonight’s inductee played with fellow Hall of Fame inductee, Joan Austin Perrotti (’00) and for head coach, Virginia Moessmang (’90).

Leona was also a member of the Glee Club, the “Hornet” newspaper, the class book committee, the prom committee, and was class social chairman. She  was also known for  writing the lyrics to the Branford High School Victory Song and during her senior year, she was voted by her classmates as “Best All-Around”, “Most Popular”, “Best Dancer”, “Most Sociable”, and “Most Athletic”.  “Pete” was the recipient of the Second Annual Sweater Award for sportsmanship and  leadership in athletics.

Following graduation from Branford High School,  tonight’s inductee attended Southern Connecticut State University and earned a Bachelor of Arts Degree. She was a reporter  at the New Haven Register from 1956 to 1981, covering Branford, Madison and other East Shore towns.  After her retirement from the journalism industry, she was a freelance graphic artist and calligrapher.  Her other interests ranged from music to reading and travelling.

Throughout her adulthood, Leona was a major force in the peace, civil rights  and women movements.  She was a founder of the Women in Media and the New Haven Women’s Political Caucus and was a member of the Women’s Liberation and NOW.  Leona later was active in the town with public access television.  She served on the Board of Directors at Citizens Television (CTV) in New Haven,   produced the show “Switching Channels” for five years, and served as a board member at Branford Community Television (BCTV), where she was chairperson of the Programming Committee.

Sadly, Leona passed away on April 16,2000 at the age of 68, leaving two brothers, Arnold and Chris Peterson of Branford.