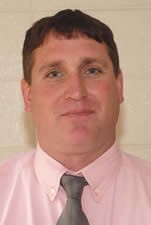 Tough, determined and competitive are just a few words to describe Kevin Potter as a football player at Branford High School.

Kevin participated in football for four seasons and he was a three year starter for the Hornets at safety and split end. He also punted and place kicked. As a motivated athlete, Kevin earned numerous accolades. In both his junior and senior years, he led the team in tackles, and interceptions. His teammates voted him as the team’s most valuable player for both seasons. Along with Johnny Gray, he served as a co-captain in 1979.

Potter’s hard nose play earned him the respect of opposing coaches. In 1978 and 1979, he earned first team All Housatonic honors. He also was voted second team All State as a junior and first team as a senior.

Longtime head coach at Southern Connecticut State University Rich Cavanaugh coached tonight’s inductee for his senior season at BHS.  Cavanaugh stated, “Kevin was an outstanding athlete. But first and foremost he was physical and was a force on the field. In the old Housatonic League, all the coaches respected Kevin for his athletic prowess.”

Kevin also excelled on the hardwood under Coach Tom Murray. He brought intensity and an unselfish attitude to the team. As a two year starter, he helped the Hornets establish a 31-9 record and the squad captured two Housatonic League Championships. Along the way, Kevin led the team in assists both years as he fed prolific scorer Jim Petela.

After high school, Kevin was recruited by current New York Giants Offensive Coordinator Kevin Gilbride and he received a scholarship to American International College in Boston. He started football as a freshman; and he then transferred to Southern Connecticut where he briefly played.

In August of 1985, Kevin became a full time police officer in Branford. Simultaneously, he served as an assistant varsity football coach at Branford High School for two seasons working with the wide receivers and defensive backs.

As a law enforcement agent, Kevin earned numerous awards including being selected as “1999 Policeman of the Year” by the Exchange Club. He retired in 1999 as a detective. Currently, he works as a Student Supervisor at Walter C. Polson Middle School in Madison under Principal Frank Henderson.

In his personal life, Kevin is married to his wife Lynda, a 1983 BHS graduate.  The couple has two children;  Nicole, a sophomore at UCONN at Avery Point where  she studies criminal justice, and  Matthew,  a sophomore at Hand High School where he is  a member of the  lacrosse team. The family resides in Madison.