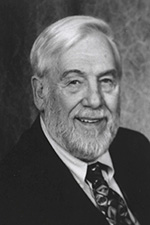 Although he was known to bring amusement and inspiration to his fellow classmates, 1997 Branford Sports Hall of Fame inductee Ken Erickson struck fear and frustration to his opponents as a three sport athlete in high school.  With his talent and his overall good nature, tonight’s inductee competed in what was one of Branford’s finest championship runs of all time.

Born in New Haven, the son of Josephine and George Erickson, Ken attended Branford High School from 1944 to 1947, where he lettered in football, basketball and baseball.  During his freshman year, he was a member of the Class “B” Championship baseball team under the guidance of 1992 Hall of Fame inductee Warren Sampson, Jr.  Despite winning only two of its first games, Branford showed impressive performances against the like of Milford, Boardman Trade, Seymour and Shelton en route to its title run.

During the 1944-45 season, Ken played on the Branford Hornets basketball squad as a guard.  He competed with fellows inductees Bill Hinchey (1991), Bill Mischler (1995) and Robert Geier (1996).  This team brought the State Championship for Class “B” Schools to Branford as they downed Derby in the tournament final 31-25.  In the regular season, the Hornets ran second to “A” class Stratford in the Housatonic League, finishing with an overall record of 16-6 and posting two seven game winning streaks.  Ken’s success followed him once again to the baseball diamond as the team went on to capture Housatonic runner-up spot, as Branford won six of its first eight games that year, with tonight’s inductee assuming the role of catcher.

In his junior year,Ken continued his quick progression as an all-around athlete.  As a center on the Branford Hornets football team, his reputation as a formidable barrier against all of his opponents spread quickly.  During the season, the all to familiar sight of running back and fellow inductee Richard Jackson running behind Ken proved that he was an awesome sight on the offensive line.  When it came time to make the transition to the hardwood floor, Branford did not have difficultly in succeeding.  The Hornets went on to win both the Housatonic League championship and a second consecutive State Class B Basketball title.  The state title was taken over Stonington 44-31 inside the Yale Gym.  Branford finished with a 17-5 record.

As a senior, Ken and the Hornets basketball team went undefeated with 18 regular season victories and three tournaments wins en route to a second Housatonic League Championship and a third state title.  As a guard on the team, Kenneth established himself as a deadly shooter from outside the foul circle.  During the season, he had a game high 16 points in a crucial league game against East Haven.

Following graduation, Ken went on to the merchant Marine Academy in Castine, Maine.  While there, he was captain of the Maine Maritime Middies Football Team.  Upon graduation in 1950 from the Academy, Ken received the Alumni Award of Outstanding Midshipman out of at graduating class of 80 cadets.  Ken held the rank of Ensign in the United States Naval Reserves and Third Assistant License in the Maritime Service  upon graduation  from the Academy.  Ken sailed in the Merchant Marine until 1958 when he took employment with Bailey Controls of Cleveland, Ohio.  Ken retired from Bailey Controls in January of 1996 and is now a fulltime grandfather.  He married Mary Lou (Fraley) 39 years ago and had three daughters: Rhonda, Cheryl, and Sandra.  Now he was his wife live in Claymont, Delaware where they are the proud grandparents to seven.  “Having received numerous awards over my lifetime, one of the greatest honors of my life is the induction into the Branford Sports Hall of Fame.  It is an incredible honor for me and my family to join all those who have been honored in this way before me,” said Erickson.