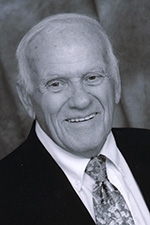 Whether it was as a two-sport high-school athlete, a member of the military service or as an unselfish contributor to the Branford community, 2006 Branford Sports Hall of Fame inductee Kenneth Bray portrayed a consistent and genuine work ethic for others to emulate.

A student at Branford High School from 1941 until the time of his deployment into the military in 1944, Kenneth was a two-sport athlete.  As a guard on the Hornets basketball team, he was part of the 1941-42 Class B State Championship squad, which finished with nine victories and five defeats in the league and an overall record of 14-7, under coach and Hall of Fame inductee John Knecht ( Class of 1988).  After three tournament wins versus East Hartford (53-31), Gilbert (51-36), and Stonington (30-28), the Hornets faced undefeated Woodrow Wilson and after a hard and close game, Branford emerged with a 41-35 victory. Tonight’s inductee was a teammate of fellow Hall of Famers Bill Fortune (1997), Anthony “Toot” Hynovich (1997),  Charles “Buddy” Montelius (1997), and Anthony “Tony” Proto (1998).

Tonight’s inductee left school early to fight in World War II and stationed on the USS Texas in Normandy as part of “D-Day”, Iwo Jima, Okinawa, and Cheberg as a Seaman First Officer.

Upon his return to Branford, Ken worked for United Illuminating as a Station Engineer, until his retirement in 1988 after 40 years of employment.

Within the community, tonight’s inductee was involved in the Branford Little League program for approximately 10 years as a contact for umpires during the late 1970’s, a board member, and was instrumental in starting up the “Buddy League”  during a time  where there was just a Little League and Pee Wee League program.  Ken coached and organized a girl’s softball team in the Branford Recreation Department Summer League and developed a girl’s grade school track team.  Tonight’s inductee  also managed numerous basketball teams in the Branford Recreation Department’s Frank J. Kinney Boys Basketball Tournament and was a reliable volunteer worker for recreation director Joe Trapasso (Hall of Fame class of 1988).  He later coached baseball for the Branford American Legion squad.

Residing in Branford with his wife, Lorraine, Ken is the father of four children, the grandfather of seven and the great- grandfather of three.  One of his grandchildren, Stephen Bray, is a pitcher in the Milwaukee Brewers farm system as part of the AAA- Nashville Sound.